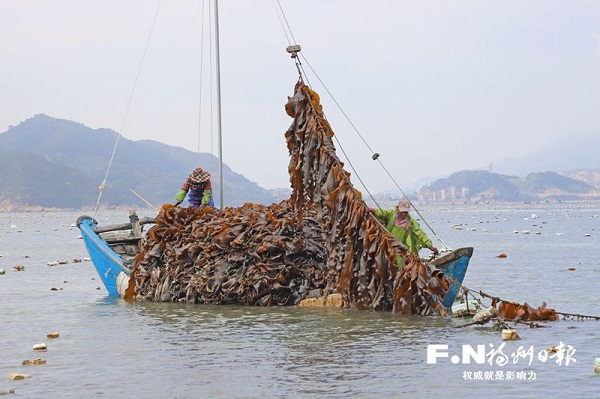 Fishermen harvest kelp off the coast of Lianjiang county. [Photo/fjsen.com]

Dong Facai, a local fisherman in his late 60s, is a participant and witness of the development of kelp aquaculture in Lianjiang county.

Dong and his father became the "pioneers" of kelp farmers when Fujian province introduced kelp seeds and piloted farming them in Lianjiang county in 1956.

Back then, the kelp farming and selling did not make much money.

"The price has gone higher because there are more and better varieties of kelp products," Dong explained.

The alga deep processing technology developed by Zhu Beiwei, an academician at the Chinese Academy of Engineering, and her team from Dalian Polytechnic University, attracted attention from the Lianjiang government and Qiu Bixiang, general manager of Fujian Yida Food Co, thanks to an "academician visiting Fujian" event held in 2015.

A project led by academician Zhu was developed in the food company after the Lianjiang government and Qiu asked her to help build a production line focusing on deep kelp processing.

In 2016, Fujian Yida Food Co contracted a 200-hectare sea area in Qida village, Lianjiang county, to establish a kelp farming base that would integrate enterprises and farmers, as well as encourage local fisherman to farm kelp.

Currently, the crudely processed kelp is being made into highly processed products such as kelp cakes, puffs, crisps and other snacks in the food company's factory, while fisherman in Lianjiang county, such as Dong Facai, are sailing to harvest their own wealth on the sea.