The acclaimed landmarks of Quanzhou city, the East and West pagodas, are the tallest existing pair of stone pagodas completed in the Song Dynasty (960-1279) in China. They reflect the highest level of craftsmanship of Chinese stone architects in the 13th century and are great paragons of their kind. 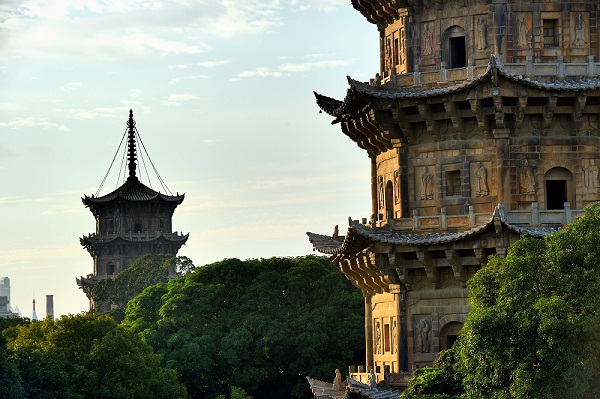 The East and West pagodas are the common names of the Zhenguo (country guarding) and Renshou (benevolence and longevity) pagodas which stand on both sides of the Main Shrine Hall of the Kaiyuan Temple in Quanzhou. Established in 686, the temple boasted the largest scale and highest official status during the Song and Yuan dynasties (960-1368). Its lavish architectural form and precious cultural value manifest the extraordinary political status as well as financial and cultural competence of the local Citong Harbor in that period, crowning the temple one of the 22 sites of the Quanzhou: Emporium of the World in Song-Yuan China, a UNESCO World Heritage.