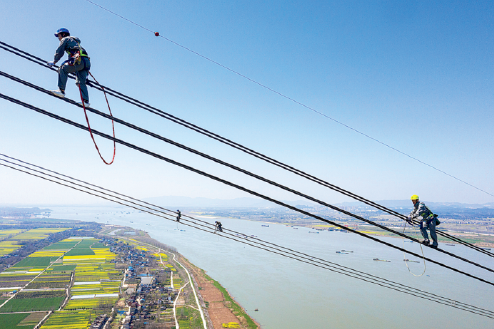 With a total investment of 10.9 billion yuan ($1.7 billion), the projects－an ultrahigh voltage power transmission line linking Fuzhou with Xiamen in Fujian province and a line linking Zhumadian in Henan province with Wuhan in Hubei province－are expected to be put into operation by 2023, said the company on Thursday during a news conference.

Luo Zuoxian, head of intelligence and research at the Sinopec Economics and Development Research Institute, said long-distance power transmission plays a key role in the country in ensuring sufficient power supply as the nation's power supply and demand are not evenly distributed.

With green power in China's solar and wind-rich regions expected to increase on a large scale in the future－including in the Xinjiang Uygur autonomous region and Qinghai province－it is likely that more green power will be transmitted and the technology of ultrahigh voltage power transmission will play a key role, Luo said.

The country has pledged to build a new electric power system with a higher share of new energy resources so as to peak carbon emissions by 2030 and achieve carbon neutrality by 2060.

Wei Hanyang, a power market analyst at research firm BloombergNEF, said demand for ultrahigh-voltage transmission lines in the country is expected to be further lifted as China has been developing clean energy on a large scale.

The company said it has constructed 29 ultrahigh voltage projects so far with total length of lines in operation or under construction reaching 46,000 kilometers. All the projects have transmitted more than 2.5 trillion kilowatt-hours as of Thursday.

The company expects its cross-provincial power transmission capacity will gain further momentum from the current 240 million kWh to 370 million kWh, which will provide strong grid support for the country's rapid development of clean energy while ensuring sufficient power supply.

According to State Grid, the Fujian-Xiamen ultrahigh voltage transmission project, with a total investment of 7.1 billion yuan, will further improve the main grid frame structure in Fujian while effectively improving power supply capacity and stability in the country's coastal regions.

It expects clean energy installed capacity, including wind and nuclear power, will account for around 80 percent by 2030, and the project－once put into operation－can well ensure clean power transmission from the region to load centers in southern areas, which will in turn substantially boost large-scale consumption of clean energy.

China launched the world's first 1,100-kV ultrahigh-voltage direct-current transmission network in 2019, and has been investing in high-voltage electricity transmission lines for more than a decade.

Its advantages in better transmission capacity, long-distance operability and low losses during transmission are especially obvious for cross-provincial transmission networks and can better meet the increasing demand for electricity in the central parts of China during the 14th Five-Year Plan period (2021-25).