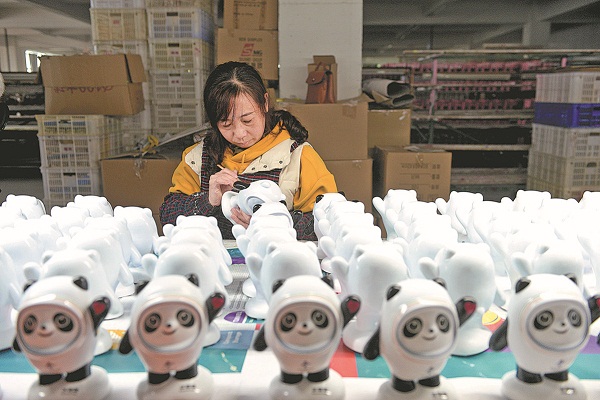 A porcelain-making factory in Dehua, Fujian province, has seen a large number of visitors flood in to experience the production process of making porcelain toys.

This follows the huge popularity of the mascots Bing Dwen Dwen and Shuey Rhon Rhon at the Beijing 2022 Winter Olympic Games and Paralympics.

The plant is the only authorized porcelain manufacturer for the two mascots. The factory produces porcelain mascots in three sizes with bright colors and smooth surfaces. They include piggy banks that are 20 centimeters tall and ornaments that are 15 cm or 8 cm tall. Employees at the factory have been ramping up production to ensure supplies.

As a factory that also serves as a 3A tourist attraction, it allows the public to visit and experience the production process, and more people have shown interest in knowing more about how porcelain figures of Bing Dwen Dwen and Shuey Rhon Rhon are made.

"A number of travel agencies cooperated with us and organized visiting tours of the factory, and many visitors were students from colleges, middle schools and primary schools," said Zheng Pengfei, general manager of Fujian Quanzhou Shunmei Group Co Ltd, which owns the porcelain-making factory.

Dehua is known as a city for ceramics manufacturing. The production process of porcelain is inherited from the firing technology that has existed and been improved for thousands of years.

The factory, with a rich experience in designing and manufacturing, also produces different kinds of toys for Disneyland and Universal Studios in China. In addition, it produced porcelain mascots for the Tokyo Olympic Games.

President Xi Jinping delivered New Year's greetings via a video link on New Year's Eve, and it showed the presence of a pair of porcelain Bing Dwen Dwen and Shuey Rhon Rhon mascots on a bookshelf behind him.

It has driven the popularity of the porcelain figures, and many consumers would like to get the same pair and put them at home, hoping the mascots can bring good luck and happiness to their families.

Zheng said the company has a design team of about 100 people. In 2019, they got the design samples of the two mascots for the Winter Games. Considering the figures' unique features and production techniques, the team designed the looks for the porcelain version of the mascots.

"The porcelain figures of Bing Dwen Dwen and Shuey Rhon Rhon are sold at franchise stores of the Winter Games, and supply has been inadequate to meet demand, given their huge popularity," Zheng said.

"It is complimentary for travelers to visit the porcelain cultural exhibition outside the factory, and we charge some fees if visitors would like to visit the inside part of the factory and experience the firing process of porcelain," he said.

Zhang Weilin, an analyst of Lead-Leo Research Institute, a market research provider, said the popularity of Bing Dwen Dwen is expected to last for a few months or even years, depending on how related authorities will operate the IP commercially and innovatively, and develop the mascots' continued commercial value.

"For the Beijing Winter Games, selling mascot toys and some derivative products serves as a common way to develop the commercial value of mascots. To extend the popularity of mascots, more innovative and diversified forms of IP products such as in digital forms will emerge to maintain their attractiveness," Zhang said.

China is the largest toy manufacturer and exporting country of toys globally, and it is known as the world's toy factory. In the past three years, more than 1.2 million new toy manufacturers registered in China annually. In 2021, more than 1.65 million new companies were registered, and the number jumped 47 percent year-on-year, hitting a record high, said data from business information provider Tianyancha.