Nail-less construction technique a bridge from past to present 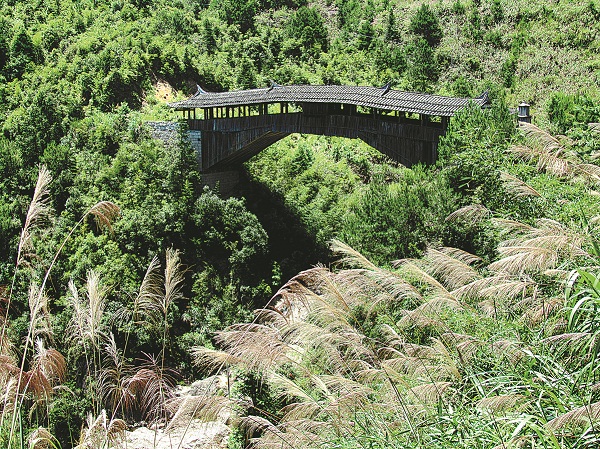 Thanks to decades of perseverance by traditional craftsmen, a 1,000-year-old wooden arch bridge in Ningde city, Fujian province, has managed to survive, and the skills used to make it have been adapted to modern life.

The bridge, which resembles a rainbow in outline, is a mortise and tenon structure built without using a single nail or rivet. A roof protects the bridge from weathering by the rain.

Eighty-five-year-old Huang Chuncai learned how to build the bridges from his father and grandfather when he was 15. By the time he was 20, he was skilled enough to become a chief designer.

When Huang mastered the traditional skill in 1969, however, there were no opportunities to put it into practice, as modern bridges were taking the place of wooden ones.

Instead, he earned his living making wooden furniture and threshing machines until the National Cultural Heritage Administration researchers came to Ningde in 2003 and tried to revive the craft.

Ningde, which is located near the coast of the East China Sea, is an area of ridges and ravines crisscrossed by streams. It is home to more than 50 wooden arcade bridges, some of which have stood for hundreds of years.

In 2008, the technique of wooden arch bridge building was listed as a national intangible cultural heritage, and Huang was designated as the skill's national inheritor.

"Over the years, my father continued drawing designs of arch bridges. He intended to leave a paper record of the craft. Before him, nearly nobody did that," said Huang Minhui, Huang's 38-year-old son.

Huang Chuncai has tried to pass on his skill, and he used to teach students at art schools in Ningde. "But many could not endure the difficulties and left," Huang Minhui said.

So far, about six students are training at a workshop set up by Huang Chuncai. "I hope the craft will endure. Our workshop welcomes anyone who wants to learn," Huang Chuncai said.