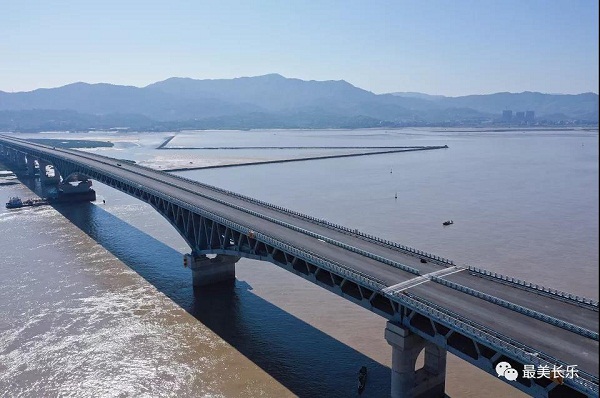 A bird's-eye view of the main structure of Daoqingzhou Bridge in Fujian province. [Photo provided to chinadaily.com.cn]

Daoqingzhou Bridge is 6.82 kilometers long. A 4.4 km session of the bridge was designed double-deck, which made the bridge the first double-deck bridge in Fujian province.

The upper deck is a two-way six-lane highway and the lower deck is a metro line for Metro Line 6.

The double-deck bridge will cut travel time between Fuzhou and Changle in half to 25 minutes and is expected to play a key role in developing Binhai New Town and upgrading the city's transportation system.

The bridge will undergo a series of tests and evaluations before it opens to traffic, a bridge contractor said.