Crab museum gets people out of shells 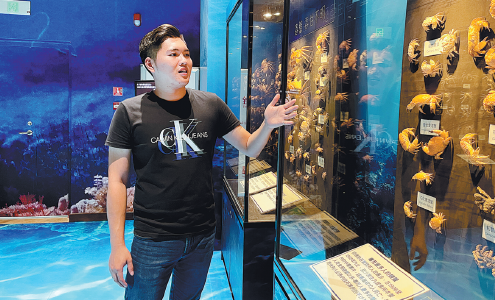 The facility in Fujian province houses more than 300 species and has a total of over 1,000 specimens

The World Crab Museum on Meizhou Island, Putian, Fujian province, is drawing enthusiasts from across China.

Covering over 1,000 square meters, the facility is home to more than 323 species of crabs, and 1,000 collections of crustaceans are on display.

"We mainly collect crustaceans from around the world. More than 90 percent of the collections here feature rarely seen crabs, and a dozen of those on display are endangered species, such as the six-legged giant crab," said Liu Cheng-hung, the museum's owner and manager.

The museum also houses members of the paromolopsis family, a type of crab reputed to look like people, and lophozozymus, which are highly poisonous.

Born in an island county in Taiwan, Liu has felt connected to the ocean since he was very young.

Most of his memories of his hometown revolve around gentle breezes in spring, heat waves in summer and the vast ocean year-round.

"I feel familiar with the ocean. I have been interested in water sports and ocean activities from a young age," he said.

His interest in crabs and ocean creatures has been deeply influenced by his family.

"My grandfather started collecting crabs out of interest. My father joined him and started making crab specimens (preparing dead crabs for display purposes). They gained lots of experience and professional knowledge," Liu said.

After graduating from the National Chengchi University in Taipei in 2017, when he was in his 20s, Liu decided to return to Penghu, his hometown, and work in the local travel industry.

In 2019, he opened a temporary crab museum in Xiamen, Fujian, to make his debut and test the market, closing it in December that year. Last year, Liu opened the World Crab Museum in Meizhou.

As the number of crabs the family collected grew, Liu learned about the diversity of the natural world and of ocean creatures. As a result, his hobby gradually became his career.

"There have been many memorable and impressive moments. It takes years and requires great luck to collect some of the rare species on display in the museum. For example, we wanted to collect both the male and female of one species, but we had to wait seven years before we finally found them," he said.

"It takes anywhere from days to months to prepare a specimen. The process includes decomposition, removing the internal organs, soaking in preservatives, air-drying and then reassembly. During the process, I have found plastic inside crabs, which illustrates how human activities are polluting the ocean, and that we should do more to protect it."

The specimens are made in Taiwan, and transported from Kaohsiung to Xiamen, then to Putian.

Of all his collections, Liu is especially fond of hermit crabs, which live in shells.

"A hermit crab will carry a shell like its own house, and the sea anemones and coral that grow on the shell are like the furniture. When the hermit crab moves, the house and furniture move with it, just like with humans," he said.

The exhibitions are based on different water systems: from lakes and rivers, estuaries, intertidal zones and the shallow sea to the deeps.

Since it opened, the museum has received 100,000 public visits.

"I came to Fujian in 2007 for the first time when I was in junior high. The Mazu culture (related to the sea goddess traditionally worshipped in the cross-Straits area) is similar to that of my hometown, and I guess that's when I had the idea of pursuing a career on the mainland," Liu said.

Liu has a clear idea of how the museum should develop.

First, he hopes there will be more collaborations with other science and technology museums in the country, so more people will be able to learn about crabs.

He will also digitalize the current collections, and allow future visitors close observation of the habitats and habits of crabs through virtual and augmented reality technologies.

Liu also hopes to collect many more specimens so he can open more museums nationwide.