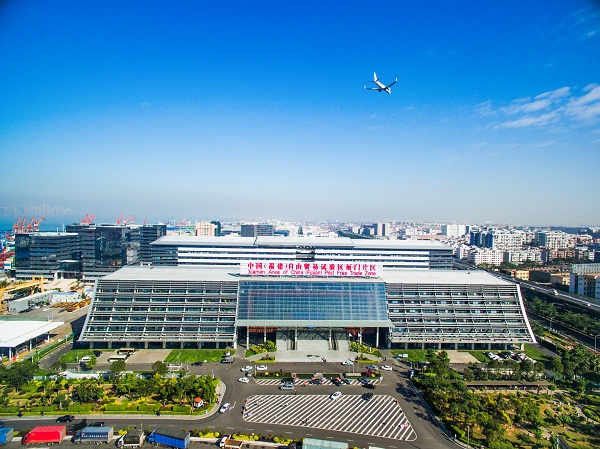 An aerial view of the Xiamen Area of the China (Fujian) Pilot Free Trade Zone. [Photo provided to chinadaily.com.cn]

Since its establishment on April 21, 2015, the Xiamen Area of the China (Fujian) Pilot Free Trade Zone has been boosting its high-quality development through reform and opening-up.

Xiamen FTZ has launched 498 innovative practices, including 111 national initiatives. Thirty innovations have been promoted nationwide, accounting for one-fifth of the national total.

Xiamen FTZ is committed to creating a world-class business environment.

It has deepened the reform of the commercial system and administrative system as well as explored new ways to protect intellectual property rights. It also took the lead in reducing costs and improving import and export efficiency, and built a transparent and efficient legal system.

"Forty years of reform and opening-up in Xiamen Special Economic Zone laid the foundation for our business environment," said Dai Bin, a Xiamen FTZ official. "Since the establishment of the Xiamen Area of Fujian FTZ, we have established international rules and regulations as well as benchmarked the highest international standards to liberalize and facilitate investment and trade."

A total of 46,000 newly registered enterprises have been added in the zone since 2015, with registered capital exceeding 680 billion yuan ($106.82 billion). The number of enterprises in the zone has grown six times since the zone was established.

In order to build itself into the "first home" for Taiwan compatriots and Taiwan enterprises, the Xiamen FTZ has stepped up the cross-Straits integrated development by building a cross-Straits youth innovation and entrepreneurship base and has set up cross-Straits maritime express pilot areas. To date, 1,036 Taiwan-based enterprises have become operational in the zone.

The zone has also continued to expand opening-up to the outside world. It has worked on building a cooperation mechanism with countries and regions along the Maritime Silk Road to form a wider and deeper relationship with them.

To boost the digital economy, the Xiamen FTZ has promoted the construction of a digital free trade zone and trade digitization.

It has also ramped up efforts to bolster its 14 key platforms including aviation maintenance, financial leasing, and cross-border e-commerce to generate an industrial agglomeration effect and spur economic growth.