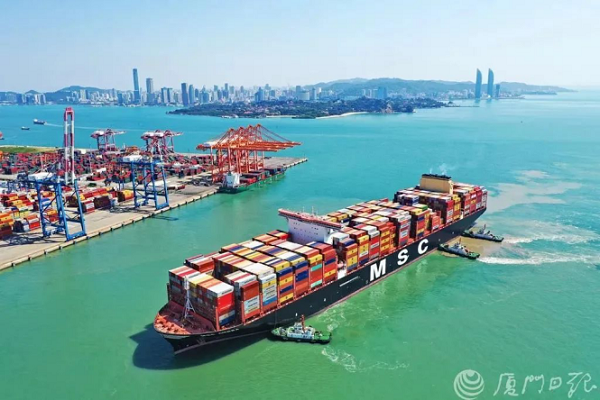 An aerial photo of a port in Xiamen, Fujian province. [Photo/WeChat account: xiamen_swj]

Xiamen in Fujian province was ranked seventh among China's top 100 cities for foreign trade in 2020, according to a list released by the General Administration of Customs on Oct 20.

In 2020, Xiamen's imports and exports of goods totaled 691.58 billion yuan ($106.92 billion), up 7.8 percent year-on-year, which was 5.9 and 2.3 percentage points higher than the national and provincial growth rates respectively.

Due to its effective COVID-19 control and prevention measures in 2020, China took the lead globally in the resumption of production and economic recovery. As a result, Xiamen had the opportunity to show its capability and competitiveness in foreign trade.

In the first three quarters of this year, the city's imports and exports totaled 657.02 billion yuan, an increase of 29.5 percent compared to the same period last year.

In addition, the city's imports and exports have continued to exceed 80 billion yuan a month since July.