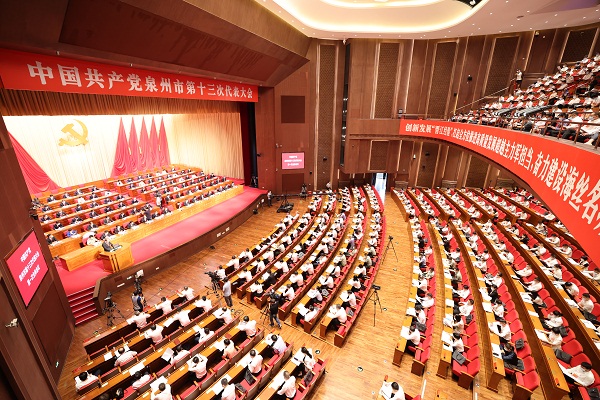 Quanzhou in Fujian province set the goal of building itself into a renowned city on the Maritime Silk Road known for its strong smart manufacturing industry by 2035 at the 13th Quanzhou Municipal Congress of the Communist Party of China, which opened on Oct 9.

"Quanzhou: Emporium of the World in Song-Yuan China" was included onto the UNESCO World Heritage List in July, spanning 22 sites and monuments across the city.

"This reflects Quanzhou's outstanding value as a vital node and a center port of the Maritime Silk Road, as well as a center of foreign economic and cultural exchanges in the Song (960-1279) and Yuan (1271-1368) dynasties, which has brought historic opportunities for the city to speed up the construction of its Maritime Silk Road pilot area," said Wang Yongli, Party secretary of Quanzhou.

In the next five years, Quanzhou will bolster its efforts to build a global consumer goods gathering center and online trading center. It will explore a pilot project on cross-border digital currency payment and settlement for Southeast Asian countries and regions. It will also establish a platform for overseas Chinese business people to return to Quanzhou, as well as build overseas economic and trade cooperation parks and warehouses.

Home to 9.5 million overseas Chinese living in 170 countries and regions around the world, Quanzhou will also focus on carrying out projects to attract this segment, such as building communities and healthcare centers to facilitate overseas Chinese to visit relatives, invest in businesses, and enjoy healthcare services in Quanzhou, Wang added.

Known as a "hometown of overseas Chinese" and for its thriving private sector economy, Quanzhou's GDP has led Fujian province for 22 consecutive years, reaching 1.02 trillion yuan ($157.82 billion) in 2020.