Traditional kompyang for the modern age 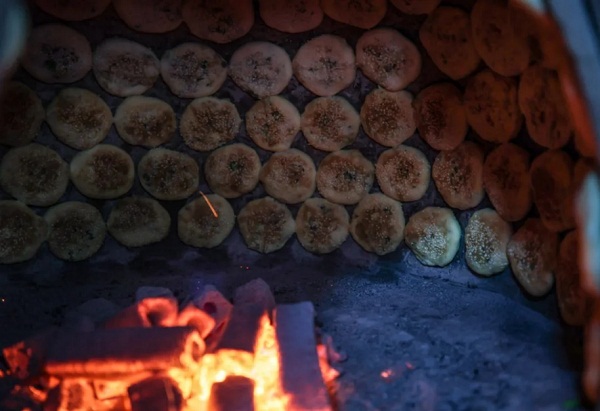 Guang bing is baked on the inner wall of a special furnace. [Photo/WeChat account: npfjsen]

Guang bing, or kompyang, is a local delicacy in Jian'ou, Fujian province. Boasting a tantalizing combination of crispness and softness, Jian'ou guang bing has been popular among the locals for over 400 years.

Guang bing comes in different shapes and flavors, but the most common variety is the one with a hole in the middle.

The snack is believed to have originated in the Ming Dynasty (1368-1644) when General Qi Jiguang, who was attempting to avoid detection by the enemy, prohibited his troops from cooking in the field as the smoke would give away their positions.

He then instructed villagers to prepare bread with a hole in the middle as this allowed for the ration to be strung together and transported conveniently.

Following the victory against the enemy, the bread was named guang bing in honor of the general.

Jian'ou guang bing was listed as a provincial intangible cultural heritage item because of its profound cultural connotation as well as the technique required to make it.

Making delicious kompyang requires not only high-quality ingredients but also the knowledge of flour fermentation and coal baking.

Zheng Jianjun is a leading figure among the inheritors of the kompyang-making technique and has contributed much to the development of Jian'ou guang bing.

"When I was seven years old, my grandfather taught me how to make guang bing and I was deeply influenced by the experience. My father makes guang bing too, so I have very deep feelings for it," said Zheng.