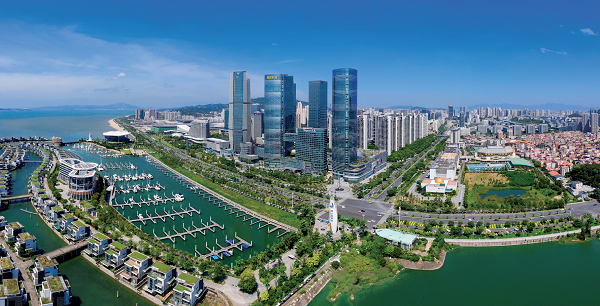 Xiamen city in eastern Fujian province is striving to become a top business destination and innovation incubator by aligning its rules and regulations with international ones and by learning from the best.

Since it was launched six years ago, the Xiamen Area of China (Fujian) Pilot Free Trade Zone has delivered impressive results in improving its business environment, according to the area's administrative committee.

"The main purpose of aligning our rules and regulations with international ones is to facilitate investment and trade," a local official told People's Daily Online.

"These measures have yielded remarkable results," the official added.

Government data show that 46,000 companies have been set up in the Xiamen area of the Fujian FTZ. The total number of companies in the area has grown to six times what it was before.

Over the six years, the Xiamen area has accelerated its highlevel opening-up to the outside world and studied how to build a special economic zone with the characteristics of a free port, local officials said.

To become one of the best, Xiamen has made continuous efforts to create an international, law-based and convenient environment for doing business, according to local officials.

According to a People's Daily report, many market entities based in the Xiamen Torch Development Zone for High Technology Industries are pleased with its services, which include a single window to cover all functions.

Convenient services have made the zone a magnet for innovators and startups. It is currently home to four State-level incubators and 21 State-level collaborative workspaces.

Last year saw 2,236 companies set up operations in the zone, People's Daily reported. Xiamen is committed to making itself an innovation hub and is doing so by providing funds, equipment and technical assistance.

From Jan 1 to May 13, Xiamenbased enterprises have collectively received 657 million yuan in awards and subsidies, People's Daily reported.

Situated nearly 11 yards underground in the university's Xiang'an campus, the lab has more than 60 high-tech achievements under its belt. Products related to it have generated an output value of nearly 3 billion yuan.

The Xiamen Torch Development Zone for High Technology Industries has built an incubator dedicated to graphene research and applications.

"The incubator provides companies with investment funds and services such as equipment sharing and technical guidance to create a quality environment for the 'seeds'," Ni Jie, chief engineer of the zone's administrative committee, told People's Daily.

Xiamen Innovax Biotech is another beneficiary of the government's support. "After carrying out countless experiments, we have finally made something happen," said Li Shicheng, deputy general manager of the company. It launched a recombinant hepatitis E vaccine and a new generation HPV vaccine, People's Daily reported.

Thanks to the policies that encourage innovation, the company's development has entered a fast lane and its annual output value has seen substantial increases, Li said.

The city has brought in or built nine major innovation platforms, which are expected to cultivate more than 100 high-tech enterprises in three to five years, according to the People's Daily report.