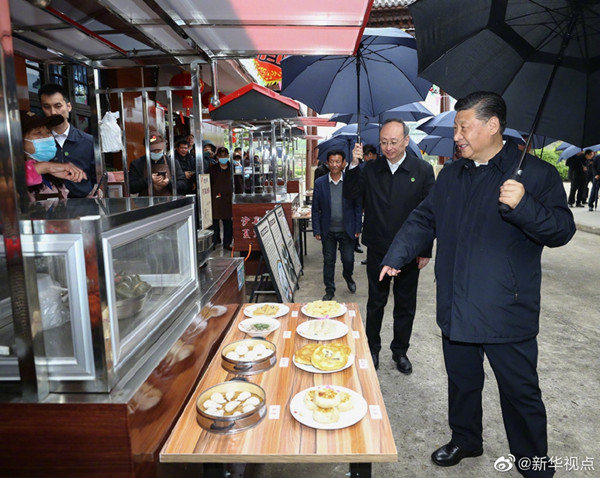 FUZHOU -- Yu Guangqing, former Party chief of a village in East China's Fujian province, is proud of himself for helping turn local snacks into a household name across the country.

Back in the early 1990s, inspired by some villagers who made big profits by peddling local cuisine in big cities, Yu, from Yubang village, Shaxian district in the city of Sanming, tried to talk the whole village into following in their footsteps.

Now, over 90 percent of the village's laboring population is in the snack business in cities across the country, satisfying customers with Shaxian delicacies including peanut butter noodles, wontons filled with juicy meat, fried rice noodles and meat soup.

During an inspection tour in Fujian province from Monday to Thursday, President Xi Jinping, also general secretary of the Communist Party of China Central Committee and chairman of the Central Military Commission, visited the village, where he underlined that the key to rural vitalization lies in developing industries that suit local conditions and benefit local people.

Yubang is now hailed as the origin of the Shaxian Delicacies eateries that have risen to popularity across the country.

With great variety, widely accepted flavors and affordable prices, Shaxian Delicacies has emerged as one of the pillar industries in Shaxian.

Xi has highlighted the important role that local snacks and similar industries can play in driving rural development.

In a visit to Shaxian in March 1999, Xi, then deputy Party chief of Fujian, said the secret to the success of Shaxian Delicacies was finding a niche market and a low-margin but high-volume business model, and called for expanding the snack industry.

The next year, Xi revisited Shaxian, urging efforts to strengthen the tertiary sector with its pillar snack industry as a new driver of economic growth.

"His words helped me see the prospects in making Shaxian eateries into a restaurant chain like McDonald's and KFC, so I gathered my courage to open an outlet outside my hometown that December," said Lin Yingjiang, a Shaxian native.

In the following years, many locals like Lin traveled afar to populate Shaxian Delicacies franchises throughout China and even abroad.

To promote the snack industry, Shaxian, previously a county, has drawn up more than 40 documents, granted 532 million yuan (about $81.56 million) in loans for start-ups and provided more than 23,000 free training courses in management and production skills over the past two decades.

Once a scattering of husband-and-wife eateries, Shaxian Delicacies is now a food chain with around 88,000 storefronts worldwide with more than 300,000 employees, generating a yearly turnover of nearly 50 billion yuan.

It has also helped lift more than 200,000 people in Shaxian and its adjacent areas out of poverty, amid the country's vigorous anti-poverty efforts that have seen nearly 100 million rural residents shake off poverty over the past eight years.

Xi has attached great importance to the development of industries that fit local conditions in rural vitalization.