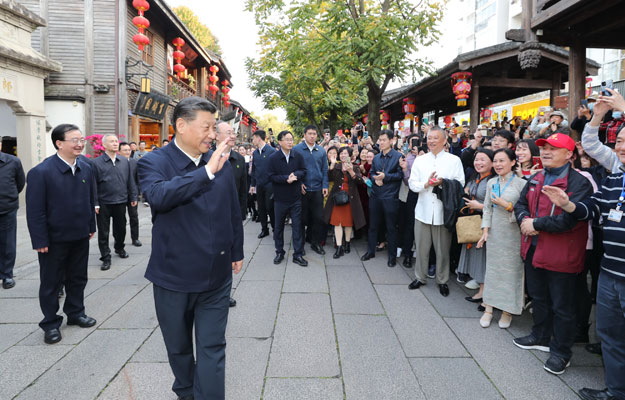 President Xi Jinping greets local residents on Wednesday while visiting the Sanfangqixiang (Three Lanes and Seven Alleys) historical and cultural area in Fuzhou, capital of Fujian province, during his inspection tour of the province. [Photo/Xinhua]

President Xi Jinping has urged eastern China's Fujian province to make greater efforts to serve and integrate into the country's new development paradigm, so as to contribute to fully building a modern socialist country.

Xi made the remark during a four-day inspection tour in Fujian that concluded on Thursday.

He urged the province to make greater progress in stepping up building a modern economic system, to make bolder moves in serving and integrating into the country's new development paradigm, make bigger strides in exploring new approaches for integrated development across the Taiwan Straits, and to make greater breakthroughs in helping the people to achieve a higher-quality life.

At a meeting attended by local officials before Xi wrapped up his inspection tour on Thursday, he expressed hope that Fujian would make new achievements in fully promoting high-quality development.

The president urged the province to find its position in building the new development paradigm, try to optimize and upgrade industrial structure, and accelerate the development of the digital industry.

Fujian should deeply integrate into Belt and Road cooperation and strive to build the pilot free trade zone as well as the new system of a higher-level, open economy, Xi said.

He underlined the need for the province to promote rural vitalization by fostering industries through its unique qualities and advantages, and he urged efforts to improve the rural living environment.

Efforts should also be made to improve people's well-being, help residents increase their incomes, and create more jobs, Xi said.

As China has vowed it would reach its carbon emissions peak before 2030 and achieve carbon neutrality by 2060, Xi said that Fujian should work out its timeline and roadmap in a scientific manner to contribute to realizing the goal for reducing carbon emissions.

He also stressed the importance of innovation in the country's development and called for efforts to increase support and improve the environment for innovation in order to stimulate its vitality and creativity.

During a visit on Wednesday to RICOM, an optical lens company in Fuzhou, Xi said China will give full support to those who are committed to innovation and make contributions to the country.

In a talk with company employees, he said innovation is a must for the country to continue making progress during the 14th Five-Year Plan (2021-25) period.

Following others' steps is not workable, and the nation must step up its efforts in technological self-sufficiency and self-dependence, Xi said, and it must enable innovation to remain as the core of the overall situation of China's modernization drive and make innovation a national policy.

To do so requires people who can seize opportunities with a sense of responsibility and mission and have the ability to do the job well, he added.