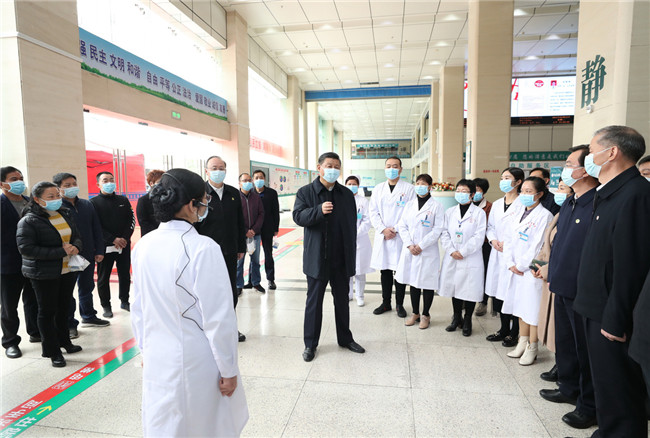 President Xi Jinping, also general secretary of the Communist Party of China Central Committee and chairman of the Central Military Commission, learns about the reform of local medical and healthcare system at Shaxian General Hospital in Shaxian district of Sanming city, Fujian province, on March 23, 2021. [Photo/Xinhua]

President Xi Jinping has called for continuous reform to the medical and healthcare system to better protect people's well-being, saying, "Health is the most important indicator of people's happy life."

Xi made the remark when inspecting a hospital in Sanming, Fujian province, on Tuesday. Reform of the healthcare system, rural vitalization and forestry reform were highlighted during the second day of his inspection tour in Fujian, which started on Monday.

At Shaxian General Hospital, Xi learned about local efforts to reform the medical and healthcare system as well as how the reforms have benefited local people. He urged continuous efforts to improve healthcare services, building on existing achievements.

The hospital has jurisdiction over 12 grassroots branch hospitals and 128 village health clinic extensions. Its establishment was also one of the measures to reform the local medical and health system.

Xi has paid close attention to the progress of the country's medical reform. At a key meeting of the central leading group for deepening overall reform in March 2017, Xi praised Sanming's experience in medical reform, urging promotion of its practices nationwide.

During the inspection, Xi mentioned unbalanced development in the country's health sector. He also underlined the need to continue to intensify reforms of the country's medical and healthcare system and increase medical resources in the 14th Five-Year Plan (2021-25) period.

"The philosophy of putting people's lives first and foremost must be upheld," he added.