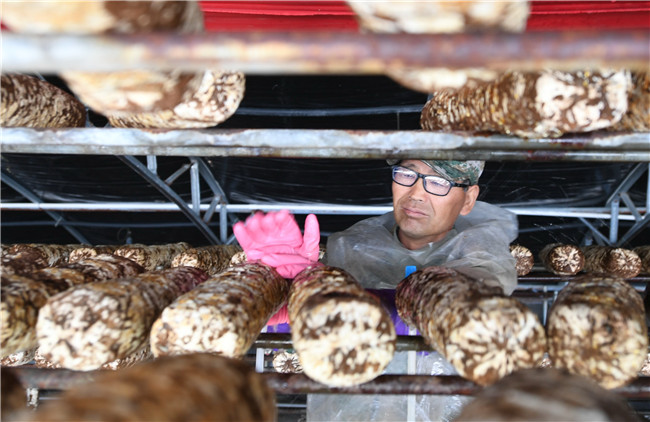 A villager in Minning, Ningxia Hui autonomous region, tends to mushrooms in the town, which houses some 60,000 villagers relocated as part of poverty alleviation efforts. CHINA DAILY

A TV series about a poverty alleviation project that started in the early 1990s in Ningxia Hui autonomous region has garnered rave reviews, touching many people with stories based on the lives of villagers in the town of Minning.

The drama, Minning Town, portrays the torment, struggles and life-changing achievements of rural residents and local officials during a relocation program to resettle villagers from the south of the region to a new location near its capital, Yinchuan, in the north.

The plot, featuring three brothers who share one pair of pants, reflects the living conditions of villagers in the 1990s.

In 1997, Xi Jinping, then deputy Party chief of Fujian province, promoted the pairing of the prosperous east coast region and Ningxia by sending experts from Fujian to help villagers in northwestern desert areas relocate and set up businesses.

Minning was named by combining the short forms of the names of Fujian and Ningxia－Min and Ning. More than 60,000 villagers have resettled there, with their per capita disposable income increasing from 500 yuan at the beginning of the relocation project to nearly 15,000 yuan ($2,325) last year.

Fujian has dispatched 183 officials and around 2,000 experts in science and technology, education and medical care to Ningxia since the cooperation began 24 years ago, according to the regional government. A total of 3.37 billion yuan invested in the project has benefited 600,000 impoverished people.

But the process of poverty alleviation was full of challenges as many villagers resisted leaving the land where their ancestors had lived.

At the time, Wang Sheng was a grassroots official in charge of the relocation program.

"The local government tried full steam to motivate villagers to resettle, but only a third were willing to move at first," he said. "Some others, including my relatives, moved back after they found the new settlement was still a barren desert."

When the farmland and water infrastructure were remolded and the cooperation assisted the development of businesses such as growing mushrooms and breeding cattle, more villagers trusted the program and joined their peers in the north, he said.

Zhang Jun, deputy principal of Minning Central Primary School, was 11 years old when he moved with his parents from Xiji county in Guyuan on a tractor carrying food and all their belongings in 1995. "It wasn't easy to go to the city, let alone a place so far away. I felt excited during the trip," he told Nxnews, a local news portal.

His family was one of the first in his village to become better off by growing mushrooms under the instruction of agricultural experts from Fujian. Daunted by the scorching weather and ferocious mosquitoes, many villagers returned to their old adobe houses and sold their relocation quotas to others, Zhang said.

Although those who first relocated struggled at first, the choice was later proven correct as they altered their destiny.

"Without the help of the relocation program, I had no chance to enroll in college, even high school," he said.

Zhang returned to the town and became a teacher after graduation. When helping with the shooting of the TV series, he also played a small part as a teacher in a scene, speaking in his local dialect.

Huang Xuan, a famous actor from Gansu province, which neighbors Ningxia, plays a local official organizing the relocation program in the TV show.

"I didn't know poverty alleviation was that difficult and how many people had been devoted to the program until I played the role," he told Nxnews. "Many retired officials have experienced the scenes depicted in the drama and they showed old photos of the real situation at that time so that we could replicate them."