Fuzhou is famous across China for its local cuisine, characterized by light but flavorful dishes, with an effort to retain the original flavors of the ingredients instead of masking them. An emphasis is put on umami, a savory taste often found in seafood, which is one of the staples in Fuzhou cuisine. Next to upscale restaurants serving seafood delicacies, there is a vibrant tradition of street food vendors in Fuzhou, with night markets around every corner offering different varieties of snacks. Many Chinese food enthusiasts come here just to taste the different locally made specialties. 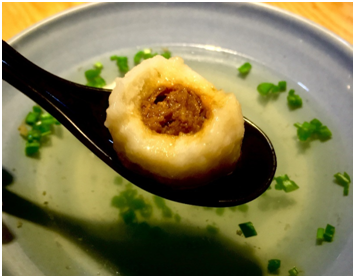 These might be the most iconic staple of Fuzhou cuisine. They are made from fish with a minced pork filling and can be found in all restaurants that serve local specialties. They are also often enjoyed as a simple, small snack in a street food setting.

This traditional dish consists of small, round pieces of pork and sliced water chestnut, served in a sweet and sour sauce. In typical Fujian style, red wine lees are used to give it its red-to-orange color and add flavor. The shape and color of the end product resembles lychee skins, hence the name. There is a legend attached to the dish: One of the consorts of a Tang Dynasty emperor came from faraway Fujian and was often homesick, and only the lychees of her hometown could soothe her. Therefore, the imperial cook came up with a way of cooking meat so that it resembled these lychees, afterwards becoming a delicacy in the palace. The chef later fled to Fujian after a rebellion, popularizing it there.

These mildly savory pastries are also called "Fuzhou bagels". They come in different shapes and flavors, sometimes filled with meat, but the most iconic variety is probably the one with the hole in the middle. The treat has an origin story of its own: When Ming Dynasty General Qi Jiguang led his troops to Fujian, Japanese pirates began launching guerilla attacks against him.

The Japanese could always trace his army because of the smoke rising up when his soldiers prepared their meals. He found out that the Japanese did not have this problem themselves, because they brought onigiri with them (Japanese wrapped rice balls). The general therefore invented a kind of bread with a hole in the middle, so it could be strung together and carried along. After his victory against the Japanese, the bread was named Guang bing, in honor of the general. It has spread to many other places since, such as Taiwan, Okinawa, Malaysia and Indonesia.

Buddha jumps over the wall

Also known as Buddha's temptation, this is probably the most iconic dish out of Fujian province and also one of the most iconic Chinese dishes overall. It is considered a delicacy for its rich taste and variety of ingredients, which can include shark fin, sea cucumber, abalone, quail eggs, fish maw, bamboo shoots and pork. Depending on the specific recipe, it can contain up to thirty main ingredients and twelve condiments. It is said that each of the single ingredients has a unique positive effect on one's health. The special manner of preparation and cooking can take up one to two whole days. There are many different origin stories for this dish.

One tells the story of a scholar traveling through China by foot with his friends during the Qing Dynasty. He was preserving all his food in a clay wine jar and for each meal he was warming the jar under a fire. When he came to Fuzhou and started cooking, the delicious aroma was wafted by the wind toward a Buddhist monastery where monks were meditating. Although monks are supposed to be vegetarian, one of the monks was so enticed by the smell that he jumped over the monastery's wall to reach the jar.

A poet friend of the traveler therefore gave it the name "Buddha jumps over the wall", claiming that even Buddha himself would jump over the wall to eat this delicious dish.