Projects on track for cross-island development

As cross-island development accelerates, Xiamen is seeing great progress in construction projects on its main island and four off-island districts.

In the off-island district of Xiang'an, 17 industrial construction projects are underway with a total investment of 47.5 billion yuan ($7.14 billion).

Among them is a new sports and exhibition center, which once complete will connect with the sports center in Siming district on Xiamen's main island.

Centering on integrated development, the city has increased efforts in upgrading its layout on the main island and building more infrastructure in its off-island districts.

In August, the city announced six transportation projects with a total investment of 890 million yuan.

According to the Xiamen transportation bureau, these projects incorporate the reinforcement and reconstruction of Xiamen Bridge built in 1991. It is the largest-ever reinforcement project for a cross-sea bridge in the country.

This bridge and other cross-island bridges including Haicang, Jimei and Xinglin as well as the Xiang'an Tunnel are crucial parts of the city's cross-island development plan, the bureau said.

By 2022, Xiamen is expected to complete construction on two cross-island channels－the Haicang Tunnel and Xiang'an Bridge.

Districts in the city's off-island parts are speeding up constructing their projects this year, local officials said.

Haicang district is developing an integrated circuit industry base with total investment surpassing 30 billion yuan. In the first half of 2020,Tong'an district started work on 23 major projects.

During the same period, Xiang'an district has planned or is currently working on 318 projects with a total investment of 106.38 billion yuan.

It has completed 83.33 percent of the annual actual utilization of foreign capital, ranking first in the city.

In the next three-to-five years, Xiamen will ramp up efforts to achieve high-quality development in all-around aspects, and further promote cross-island development, according to the city government's plan. 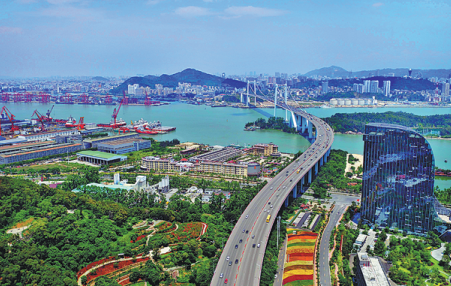