From a seaside town to a prosperous metropolis, Xiamen in East China's Fujian province has seen tremendous development over the past 40 years as a special economic zone.

Designated as an SEZ in 1980,Xiamen has continually come up with a series of innovative city development plans.

In 2002, the city issued its cross-island development strategy for 2004-20, promoting the transformation of Xiamen from an island city to a bay city.

According to the strategy, local government planned to integrate the development of its six administrative districts on the main island and mainland.

Over the past decades, the city has completed a series of infrastructure projects that has promoted its cross-island development.

In addition, the city has built industrial parks and free trade zones in its off-island areas including Haicang, Jimei, Tong'an and Xiang'an, as part of the effort to enlarge its urban capacity and comprehensive competitiveness.

In 2016, the city upgraded its city layout planning, integrating the construction of subcenters in its four districts, focusing on building six new towns in areas including Maluan Bay, Haicang Bay and Jimei district, and a new airport in Xiang'an district. These moves aim to establish a three-dimensional urban space.

Xiamen has seen rapid development in its transportation network, and the annual container throughput of Xiamen Port has surpassed 11 million, ranking 14th in the world.

In addition to investment and infrastructure construction, the city has also spared no effort in boosting housing construction.

This year, Xiamen will complete the construction of 100,000 affordable housing apartments in the aim to create more livable communities.

According to the city plan, Xiamen will further promote cross-island development during the 14th Five-Year Plan (2021-25) period, aiming to improve the city's core competitiveness and to develop it into an international metropolis by 2025. 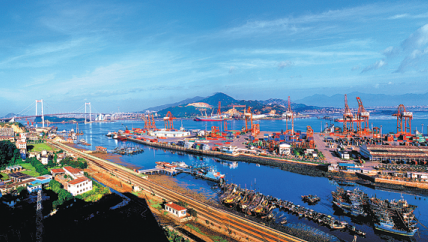