Xiamen to go all out to attract investment

Over the past 40 years, Xiamen in East China's Fujian province has taken the lead in boosting China's reform and opening-up, becoming a pioneer in attracting investment and innovating its economy.

"To mark the 40th anniversary of the establishment of the special economic zone, we will promote high-quality development in all sectors and build Xiamen into a city of innovation, entrepreneurship, beauty and modernity," said Hu Changsheng, Party secretary of Xiamen.

In the past six years, Xiamen has implemented a total of 326 reforms in the economy, culture, environment and social development.

They included 197 projects with Fortune Global 500 companies and 114 projects by State-owned enterprises.

The city has completed 983 projects with a total investment of 350 billion yuan.

Xiamen has focused on optimizing its business environment, improving government services and deepening reforms by relaxing access for foreign investors and reducing taxes and fees.

Hu said Xiamen views this year as the "year of investment and project construction".

"We will go all out to attract investment and promote the execution of projects to achieve high-quality development."

In 1980, the State Council approved a 2.5-square-kilometer area in Xiamen's Huli district as an experimental area of the economy and investment.

The city is among China's first batch of special economic zones, together with Shenzhen, Guangzhou, Zhuhai and Shantou.

Xiamen is not only known for a mild climate and beautiful scenery, but also its economic zones.

One example is the Xiamen Torch High-tech Zone, described as a "special zone within a special zone".Since its establishment in 1990, it has made outstanding achievements in developing high-tech industries and boosting cross-Straits cooperation.

Over the past 30 years, the zone has been an industrial cluster for the integrated circuit, panel display, software and information service sectors.

In recent years, the zone has focused on emerging industries such as artificial intelligence, big data, cloud computing, the internet of things, new materials, new energy, and digital cultural creativity.

High-quality projects have settled in the high-tech zone, including Inspur's new-generation information technology industrial base. It opened in April this year, with an estimated annual output of 300,000 of Inspur's latest PCs and servers.

In 2019, the exhibitions held in Xiamen attracted 110,200 exhibitors from more than 150 countries and regions around the world.

Using the multiple advantages accumulated by its exhibition industry, Xiamen's trade in goods has grown significantly every year and "Made in Xiamen" products are sold to more than 220 countries and regions around the world. 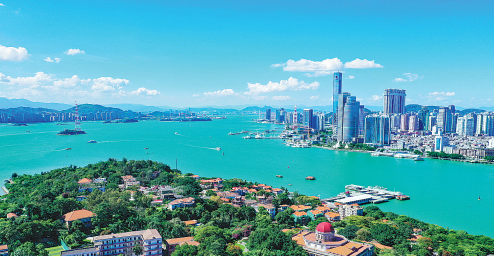