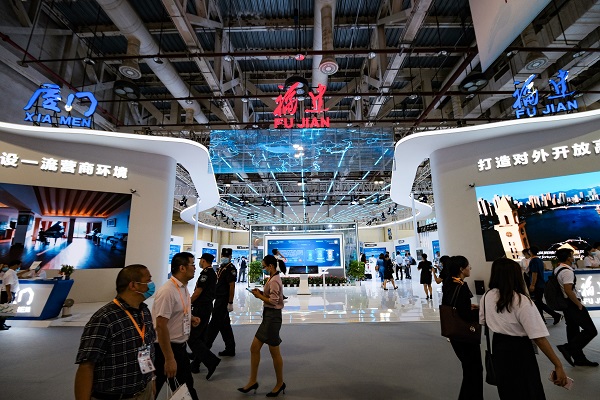 The China International Fair for Investment and Trade is held in Xiamen, East China's Fujian province, from Sept 8 to 11. [Photo by Xiao Da/chinadaily.com.cn]

China Resources (CR) will continue to deepen cooperation with Fujian and increase investment in the province, according to Wang Xiangming, chairman of CR, at the 2020 China International Fair for Investment and Trade (CIFIT) and the Belt and Road Investment Congress on Sept 10.

Wang said that CR will continue to explore business opportunities in Fujian and work to improve services for CR-invested enterprises throughout the province.

CR also plans to encourage its enterprises in Fujian to take on a more active role in urban development and operations, including the development of "new cities" and renovations of villages in Xiamen, Fuzhou, and Quanzhou.

According to Wang, CR Vanguard has established several agricultural bases in Fujian and launched a poverty-relief project to promote the sale of local agricultural products.

The group also worked with enterprises directly under the central government and allocated 2 billion yuan ($292.8 million) in industrial funds to boost consumer market sentiment and provide new opportunities for enhancing the vitality of market players.

The two sides plan to increase efforts to promote the upgrading and transformation of State-owned enterprises with the aim of promoting larger-scale production and more ecofriendly development among traditional industries.

"CR plans to invest 100 billion yuan in Fujian throughout the period of the 14th Five-Year Plan (2021-2025) and contribute to Fujian's high-quality economic growth," said Wang.

Wang noted that over the past few years, CR has set up a long-term strategic relationship with Fujian and established a presence in a wide range of industries in the province, including electric power, real estate, gas, and medicine.

According to statistics, CR-invested enterprises in Fujian have resulted in the creation of nearly 10,000 jobs and generated 18 billion yuan in annual operating revenue. Their total assets exceed 30 billion yuan.

Founded in 1938 in Hong Kong, CR has since become a national key enterprise under the State-owned Assets Supervision and Administration Commission. It is involved in urban construction, energy services, science and technology, and financial services. It ranked 79th on the Fortune Global 500 list of 2020, which was released on Aug 10.