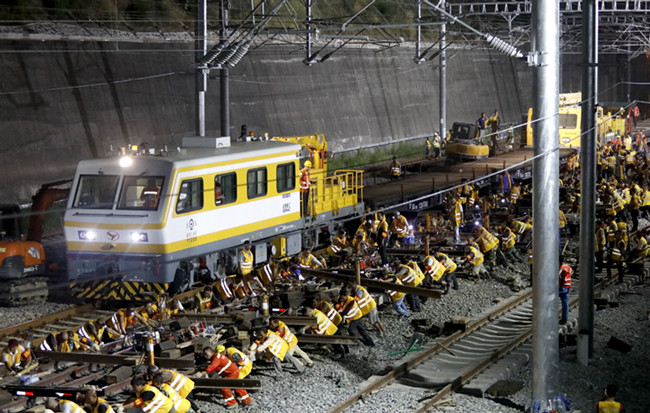 China's first cross-sea bridge accommodating both vehicles and railway traffic - the longest of its type in the country - has started its static load tests and is expected to open to traffic by the end of this year, according to the China Railway Nanchang Bureau Group.

Two heavy freight trains with a combined load of 2,392 metric tons started a six-day test on the Pingtan Haixia Rail-Road Bridge on Saturday to see if the overall performance of the bridge can meet the safety requirements.

The 16.3-kilometer bridge, which began construction in 2013, is designed to support six lanes of vehicles with a maximum speed of 100 kilometers per hour on its upper path, and two tracks below carrying trains traveling up to 200 km/h.

The span is built over seawater, where about 300 days a year the wind is heavy and impedes construction, and had to overcome severe meteorological, hydrological and geological problems, according to the company.

The dual-use bridge is an important section of the Fuzhou-Pingtan railway, with a length of 88 kilometers connecting downtown Fuzhou, Fujian province, and the island county of Pingtan off the east coast of Fujian. The railway is also expected to be put into use by the end of this year.

Pingtan is the nearest mainland county to the Taiwan Island-just 68 nautical miles from Taiwan's Hsinchu city. It has been a development bottleneck because of poor transportation in the past.

In 2010, the Strait Bridge began operating for cars only. It links Pingtan with an outlying county of Fuzhou and is currently the only entrance and exit for the island. It takes about two hours to get from the island to downtown Fuzhou.

After it is put into use, the new span will cut travel time from two hours to about 30 minutes between the two areas, the company said.

"As an important passage connecting to Taiwan in the long-term, the bridge will play a positive role in promoting cross-Straits infrastructure," it said.

In the draft outline of the 13th Five-Year Plan (2016-20), a high-speed railway linking Beijing and Taipei, Taiwan, was proposed. The Fuzhou-Pingtan railway represents the southeast end of that railway. For the remainder of the distance-Pingtan to Taiwan-an underwater tunnel has been proposed.