Touching China – US professor introduces China to the world 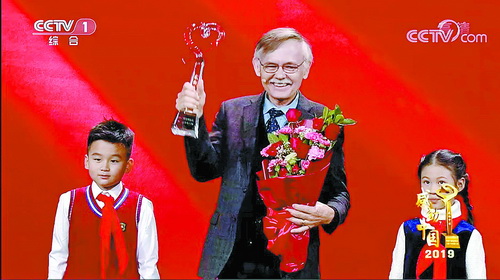 A screenshot of the award ceremony on China Central Television where William N. Brown receives the Touching China Award [Photo/xmnn.cn]

William N. Brown, a professor at Xiamen University, was listed among the "people who moved China in 2019", receiving an award at a ceremony on China Central Television on May 17, the Xiamen Daily reported.

The professor at XMU, situated in the southeastern coastal province of Fujian, won the award for "striving to introduce China to the world".

Brown and his family moved to Xiamen from the United States in 1988 when he started  working at the School of Management of Xiamen University. Four years later, he became the first expat in Fujian to acquire a permanent residence permit in China.

He has abundant books about Chinese history and culture at his home, according to Shen Yifeng, his colleague at XMU. "He knows even more about China and Xiamen than we do."

What touched Shen the most is that Brown spent a lot of money collecting books and pictures that recorded the city's development and donated them to a local museum and the management school.

Brown has also played his part in promoting the city to the world, helping Xiamen and Quanzhou win gold medals at the International Garden City Competition in 2002 and 2003, respectively.

In 1994, Brown drove his family across some 40,000 kilometers in China and made a point of  visiting several poverty-stricken regions, such as Ningxia Hui autonomous region and Qinghai province. The trip allowed him to learn more about the rest of China outside Fujian.

He recorded his experiences and impressions on China through letters to his family members and friends in the US over the past decades. Off the Wall – How We Fell for China, a book including 47 of his letters written since 1988, was published in both Chinese and English in late 2018.

In 2019, he restarted his journey, enabling him to see how China had changed over the past 25 years, a country which he said had never disappointed him.

"Twenty-five years ago, we were stuck for three days due to poor traffic conditions in rainy days. And now, even the remote areas in West China are connected with broad roads," Brown recalled.

He said he plans to write another two books to record his journey, reflecting China's achievements through its reform and opening-up.

"I don't think I've done anything to touch China. On the contrary, China has touched me,"  Brown said at the award ceremony.

"One day, the Chinese dream will be the world's dream. China will touch the world. I have full confidence about that."