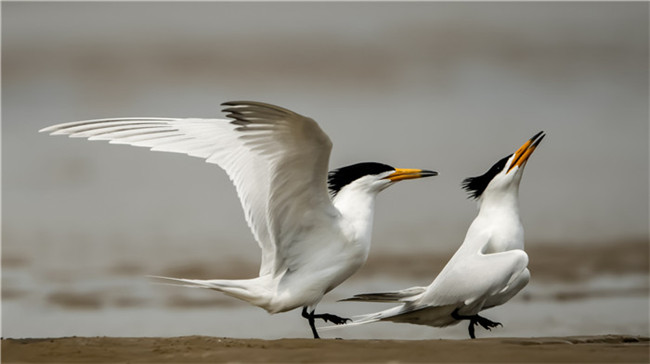 The Minjiang River estuary wetland, a national nature reserve in Fuzhou, capital of East China's Fujian province, is a paradise for water birds thanks to the continuous improvements that have been made to the environment in Fujian, local media reported on May 1.

The Minjiang River, an important tributary of the Yangtze River, is seen as the mother river of Fujian, and the Minjiang River estuary wetland is the largest national wetland park in Fujian Province.

The park, which completed construction in 2015, covers an area of more than 2,300 hectares and is an important channel for bird migration between East Asia and Australia.

In recent years, the park has become a symbol of the progress the city has made in improving its environment and ecosystems.

The park is now home to 1,089 species of wild animals and plants, including 152 species of water fowl such as Chinese crested terns, platalea minor, dalmatian pelican, collared kingfisher and spoon-billed sandpiper. Every year, more than 50,000 migrating birds fly over and through the park, creating some stunning natural scenery in the city.

Chinese crested terns, the world's most endangered tern species, were first spotted in 2004 at the wetland park. They normally fly to the wetland from April to September every year. The total population of the critically endangered bird is estimated at less than 100 worldwide, and up to sixteen of them have been seen together in the wetland.