Shoushan stone is a kind of alabaster quarried from a mountain called Shoushan in the northern suburbs of Fuzhou. This craft is prevalent in the Jin'an area of Fuzhou, capital city of Fujian Province on China's east coast.

With a soft, smooth surface and various colors, Shoushan stone is an ideal material for carving and for that purpose is known as "the top grade-colored stone." It is characterized by a soft smoothness and exquisite cohesion.

The long history of stone carvings has seen many famous carvers and fine carvings. Most of these masterpieces were either collected at the palace as imperial treasures or selected by local officials as tributes to pay to the court. First-class carvers were often called into the court to carve Shoushan stone artworks. Some of these stone carvings are still kept in the Imperial Palace in Beijing. 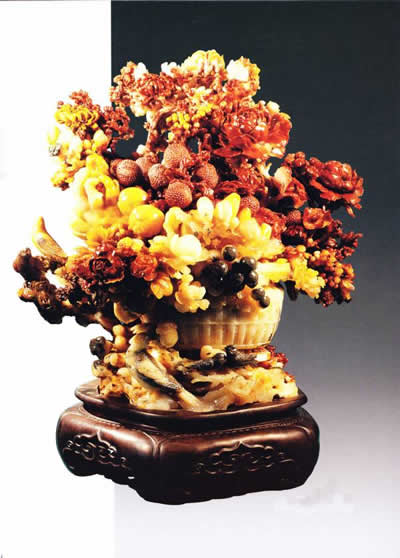