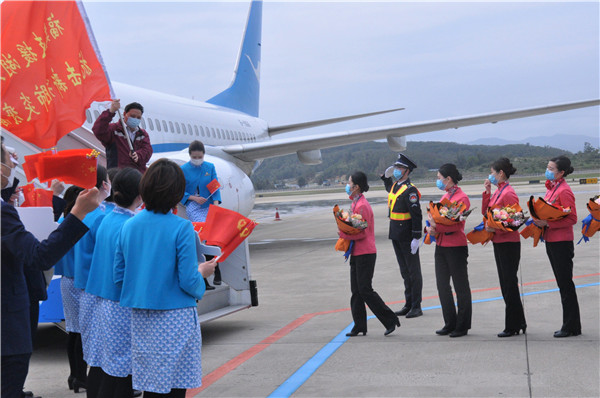 A total of 254 medical workers from Fujian province who helped fight against the novel coronavirus pneumonia epidemic in Yichang, Central China's Hubei province, returned to Fuzhou, Fujian province on March 23.

According to news reports, the 254 medical workers were sent back on chartered flights organized by Xiamen Airlines, while another 24 disease control officers are staying in Yichang to complete unfinished work.

The medical workers were dispatched to Yichang on Feb 11, and made remarkable contributions to the battle against the novel coronavirus pneumonia over the course of their 42-day stay in Yichang. An outstanding 94.49 percent of patients under their care made full recoveries.

Many local residents gathered at Wuling Square in Yichang to bid farewell to the Fujian medics. Zhou Ji, Party secretary of Yichang, spoke highly of their sacrifice and contributions to the battle against the disease, and expressed his sincere thanks to Fujian for its support for Yichang's epidemic prevention and control.

"I will never forget the 42-day work in Hubei. It will be the most unforgettable experience of my life," said Yan Ruohan, a member of the Fujian medical team.

As of 24:00 on March 22, Yichang had reported no newly confirmed cases of novel coronavirus pneumonia for 24 straight days, and the city's rate of recovery was 95.81 percent. The city now has three confirmed cases and no suspected cases, according to statistics released by the city's health commission.