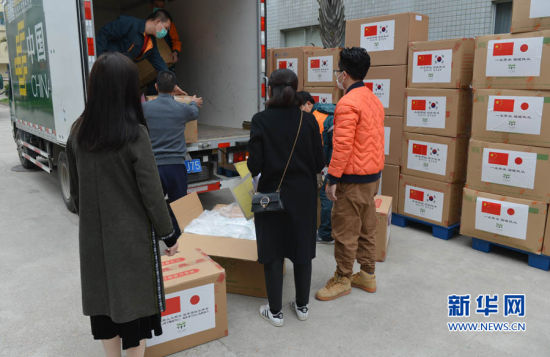 Staff help load medical supplies onto a truck in Fuzhou, capital of East China's Fujian province, on March 20, most of which is headed for Fujian's international sister provinces. [Photo by Zhang Jiannan/Xinhua]

East China's Fujian province recently donated epidemic-prevention materials to 11 countries, including its sister provinces, according to news released by the Fujian Provincial Office of Foreign Affairs on March 20.

The medical supplies, worth 2.5 million yuan ($352,555), are being sent to 20 of Fujian's sister provinces around the world, including severely affected countries such as Japan, South Korea, Italy and Spain, and some Southeast Asian countries which have large populations of overseas Chinese from Fujian.

Authorities at the foreign affairs office said that many of Fujian's sister provinces had lent a helping hand to Fujian since the outbreak of the COVID-19 began and donated medical supplies through various channels to support its anti-epidemic work.

According to incomplete statistics, Fujian received 69 consolation letters from 33 countries. Sister provinces in 10 countries such as Japan, South Korea, Serbia, Indonesia and the United Kingdom, as well as some international organizations, donated a large number of medical supplies to Fujian two months ago to help overcome the disease.