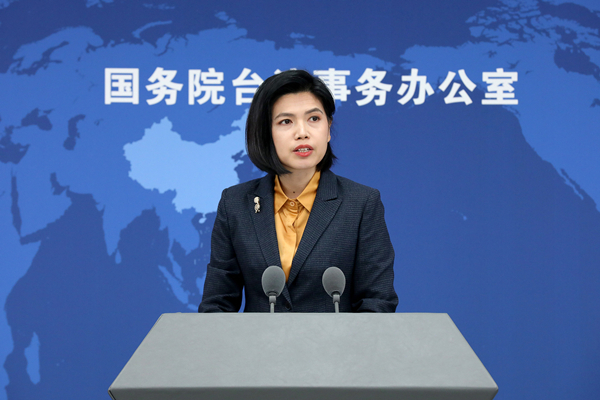 The Chinese mainland is planning infrastructure to connect Fujian province to Taiwan, a mainland spokesperson said on Wednesday.

Zhu Fenglian, a spokesperson with the State Council's Taiwan Affairs Office, said cross-Straits transportation infrastructure meets the need for deeper integrated development across the Taiwan Straits and serves the fundamental interests of people on both sides.

The construction of a branch line from Fuzhou, the capital of Fujian, to Taipei in Taiwan has been planned out in a guideline on developing a comprehensive transport network that was jointly released by the Central Committee of the Communist Party of China and the State Council, Zhu said.

Fujian province has completed preliminary technical plans for bridges connecting the coastal area of Fujian with Taiwan's Kinmen and Matsu islands, she said.

The Pingtan Haixia Rail-Road Bridge, connecting the mainland with Pingtan, an island county in Fujian province, has already opened to traffic, linking it to the national railway network, she added.

Pingtan, which lies 126 kilometers from Hsinchu in Taiwan, is the largest island in Fujian province, and is also the closest mainland location to the main island of Taiwan.

Zhu said the establishment of a more convenient and unobstructed transportation network spanning the Straits will provide better service for the benefit of compatriots on both sides.

The Ministry of Natural Resources said recently that it will work with relevant departments and Fujian province to study the integration of major transportation and infrastructure development across the Taiwan Straits into relevant national planning.