Editor's Note: To celebrate the 100th founding anniversary of the Communist Party of China, we are launching the "100 CPC Stories in 100 Days" series, featuring foreigners who witnessed and participated in the CPC's history and helped the world better understand the CPC. The following is the 97th story of the series. 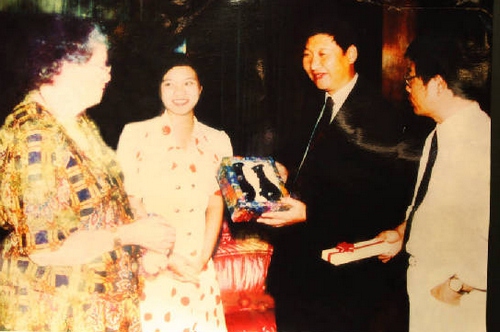 Xi Jinping, the then Secretary of the CPC Fuzhou Municipal Committee, meets with Mrs. Gardner.

For most Chinese people, Kuliang may be a place they have never heard of. But for Milton Gardner, an American who once lived in China in the early 1900s, this place in the suburbs of Fuzhou City, Fujian Province is where he spent 10 happy years of his childhood.

On 8 April 1992, an article entitled "Ah! Kuliang" published on page seven of People's Daily moved many readers. This article was about the story of Milton Gardner, late professor of physics in the University of California. In 1901, Mr. Gardner came to Fuzhou with his parents when he was a baby. The family returned to California in 1911. In the ensuing decades, Mr. Gardner's long-cherished dream was to revisit his childhood hometown in China. Regrettably, however, he was never able to do it. "Kuliang, Kuliang" were his last words to this world. Mrs. Gardner had since made several trips to China just to fulfill the dying wish of her husband, albeit not knowing where Kuliang is. All her efforts, however, ended in vain. Later, Mrs. Gardner found 11 faded stamps among her husband's remembrances with "Kuliang, Fuzhou" in the postmarks. With the help of a Chinese student, Mrs. Gardner finally figured out that "Kuliang" means "Kuliang" in Fuzhou, China.

Among the readers touched by the story was Xi Jinping, who was then Secretary of the CPC Fuzhou Municipal Committee. After reading the article, Xi Jinping immediately had government officials contact Mrs. Gardner and invite her to Kuliang.

On the afternoon of 21 August 1992, Mrs. Gardner arrived in Fuzhou after flying from San Francisco to Beijing. That evening, Xi Jinping welcomed Mrs. Gardner at the Fuzhou Hot Spring Hotel. He said warmly that a special bond had brought them together. Fuzhou is a city with a long history, and its friendly exchanges with the outside world date back centuries. Hundreds of years ago, it was from Fuzhou that the famous Chinese navigator Zheng He set out to forge friendship with foreign countries. Kuliang used to be where foreign friends liked to spend the summer. Noting the special bond between Kuliang and foreign friends like Mr. Gardner, Xi Jinping expressed how he was touched by Mr. Gardner's attachment to Kuliang and Fuzhou even in his twilight years. He also said that Mrs. Gardner was invited here to visit the place her late husband always missed and to renew the friendship. Mrs. Gardner, expressing her heartfelt thanks, stressed how she valued such friendship. She said that she would videotape this trip and share it with her friends in the UK and California, US.

After learning that Mr. Gardner had collected a pair of lacquer vases, Xi Jinping gave Mrs. Gardner a pair of brown and red lacquer vases featuring the technique of the 1990s among other souvenirs. Xi Jinping told Mrs. Gardner that the technique was improved compared with the past. What Mrs. Gardner gave in return was the exact lacquer vases collected by Mr. Gardner. She said that this pair of vases, which were 100 years old, were brought to California from China by Mr. Gardner's parents. She added that Mr. Gardner took good care of the vases and brushed them with special paint for protecting cultural relics every few years during his lifetime. Xi Jinping said happily that these made-in-Fuzhou vases would be preserved in a museum.

The following day, under the arrangement of Xi Jinping, Mrs. Gardner went to Kuliang. She finally got to see with her own eyes the beautiful place that meant so much to her husband. As she walked along the mountain paths planted with Cryptomeria trees, she recalled with emotion that her husband used to climb trees, swim and hunt birds here when he was a child. She was excited to see the old houses of a century ago, where her husband had lived. With the help of the local government, she also met nine of Mr. Gardner's childhood neighbors, who were all in their nineties. It was such a delight to Mrs. Gardner when they sat around and talked about the past. She was so happy when these old neighbors told her an interesting story about how Mr. Gardner's elder brother joined the locals on a tiger-hunting trip as this story coincided with an old photo that she had brought with her. Mrs. Gardner said that her husband used to eat a meal of Chinese rice every day, and would make a Chinese dish for supper when he was asked to cook.

During the next few days, Mrs. Gardner tasted the authentic delicacies cooked by locals living in the mountains, watched the pandas enjoying summertime in Kuliang, visited places like the senior citizens' activity center, the Fuzhou Economic and Technological Development Zone in Mawei, an arts and crafts workshop and a carving factory, explored Fuzhou's cityscape including the local Dongjiekou Department Store. She was impressed by the fundamental changes in Fuzhou. Though she had been to China several times, Mrs. Gardner said this trip was the most exciting and eye-opening one. She thanked the friends in Fuzhou for their hospitality. She thanked everyone who had helped her to make her husband's dream come true. She also said that she would take back to the US the sincere friendship of the people of Fuzhou.

Despite the passage of time, this wonderful story that took place in Kuliang will never fade away. Rather, it will be passed on from one generation to another.

On 15 February 2012, at the luncheon held by friendly organizations in the US, the then Vice President of the People's Republic of China Xi Jinping told more than 700 Chinese and US political and business figures that there were many more touching stories like this between the two peoples. Xi Jinping thus underlined the importance to further strengthen people exchanges and forge the strongest public support for the mutually beneficial cooperation between China and the US.