Guideline serves as a culture shield 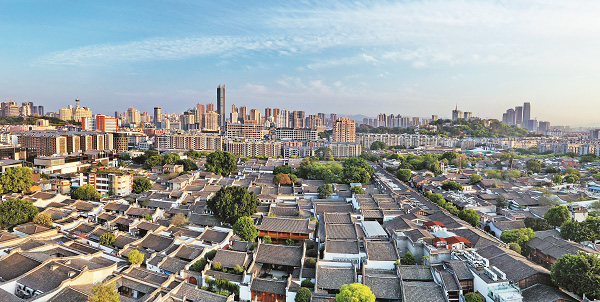 Document spells out measures to boost protection of nation's heritage

China will scale up efforts to protect cultural heritage in rural and urban areas with stronger measures to safeguard relics and prevent the demolition of ancient buildings, a move officials and experts said will bolster the nationwide preservation of historic sites and intangible heritage.

In a guideline published on Sept 3, the general offices of the Communist Party of China Central Committee and the State Council, China's Cabinet, introduced a set of new measures designed to protect, utilize and pass down historical cultural heritage in a systematic manner, saying that this is key to efforts to build a strong socialist culture.

The measures will target prominent issues, such as acts that damage or destroy cultural heritage during urban and rural development. The guideline aims to coordinate the protection of individual buildings, historical blocks, streets and neighborhoods as well as natural landscapes, cultural settings and intangible heritage.

By 2025, the nation will have established a tiered, multidimensional system for the protection of urban and rural cultural heritage and will have ensured that construction posing a threat to relics is effectively curbed, the guideline said.

"We believe this (the guideline) is of milestone significance," Huang Yan, vice-minister of housing and urban-rural development, told a news conference on Sept 8. "It will serve as a strong pillar for inheritance and protection efforts in various areas."

She explained that the document clearly outlines protection targets, ensuing measures and detailed requirements, and specifies the duties of relevant departments, adding that it is also the first special document issued by the central government on the protection of urban and rural historical culture.

About 42,700 historical buildings and 970 historical blocks have been placed under government protection, with 312 townships and 487 villages designated as possessors of rich historical and cultural heritage.