Party leader, who dies in line of duty in Fujian flooding, is honored 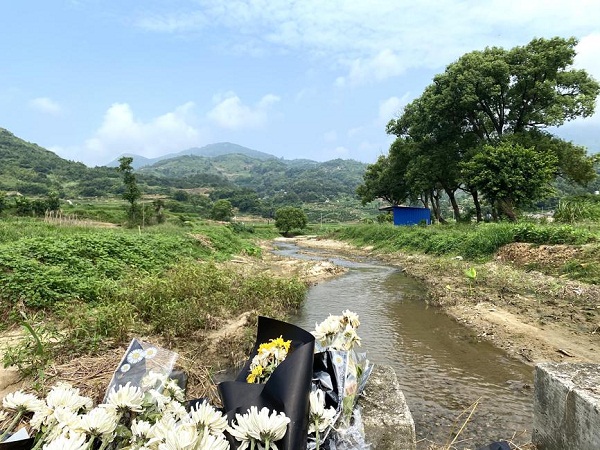 Flowers are left by the bridge over Jinshaxi river. Local residents from Guxian village where Sun Limei worked leave flowers to mourn her. [Photo by Xu Wenjin/For chinadaily.com.cn]

"She tried to keep us safe even though she herself was in danger, till the last moment," remembered Fan Lili, also the colleague of Sun and Tang.

Sun was regarded as a devoted Party secretary in the village. She had visited every household and was concerned with their difficulties in the village of over 3,000 people. After work, Sun often went to the villagers and chatted with them.

"She would come to help as soon as possible whoever was in need of assistance," said Yang Zhaoke, a 73-year-old farmer. "Once we needed money to treat my kid in the hospital, she helped me to collect money and personally donated 500 yuan ($77) to me."

Sun has devoted all her concerns to her work and did not have much time for her family. Yang Xin, son of Sun, said that he would complain about her absence in family affairs.

"But now I understand her greatness as a Party member delivering basic services in rural communities," Yang said. "I am proud of her."

The dedication and commitment of Sun have set an example for the people. In late August, the departments of Fujian provincial committee of the Communist Party of China and the All-China Women's Federation had bestowed honors on Sun posthumously.

Feng Xiaojie contributed to this story.