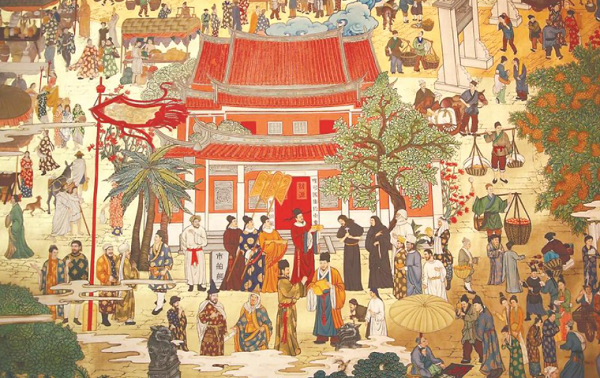 A thangka painting project showcasing the features of the UNESCO world cultural heritage site "Quanzhou: Emporium of the World in Song-Yuan China" was spotlighted recently by national broadcaster CCTV.

The "Quanzhou 100-meter Thangka Scroll for the Maritime Silk Road" project was initiated in April 2019 in Quanzhou, Fujian province. It is currently under creation by thangka artists from Qinghai province, as well as literature and history experts.

The 100-meter thangka work will consist of 14 paintings showing 10 different themes, such as "the oriental harbor", "the world's commercial port", "city of manufacturing", and "multi-culture", to depict Quanzhou, which was known overseas as Zayton back in the Song (960-1279) and Yuan (1271-1368) dynasties, as one of the busiest seaports in the world.

For instance, more than 10 scenes and 1,388 characters were designed for "the world commercial port" theme painting alone, which took the creation team more than two years to complete.

To date, the creation team has completed two theme paintings, "opening" and "the world's commercial port". It is currently in the middle of making "the oriental harbor" theme painting, which will show a bigger scene with more characters, as well as integrate representative historical sites like Shunji Bridge, the main access route to ancient Quanzhou's commercial district, and Deji Gate, the remains of the southern gate to the old city of Quanzhou.