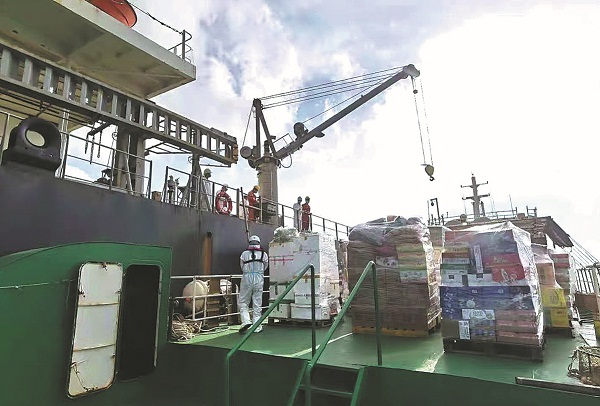 About 10 metric tons of food are transported onto the Pescadores SW on Saturday off the coast of Fuzhou, Fujian province. [Photo/China Daily]

Ten metric tons of meat, fruits, vegetables and other supplies have reached a Panamanian freighter that has been anchored off the coast of Fujian province for more than a month as it waits to be unloaded, maritime authorities said on Saturday.

The crew of the cargo ship Pescadores SW had been scrambling for supplies while waiting to enter Fuzhou Port to unload.

The ship's docking has been delayed because warehouses are at full capacity. That forced the 19 crew members aboard the vessel, all Chinese nationals, to turn to the internet for help.

Their plea quickly got the attention of the government of Fuzhou, the provincial capital, which reached out to the crew members, comforted them and urged the city's maritime safety administration to roll out an emergency plan.

The administration said in a statement that the ship had received approval to enter the port on July 17 but could not unload its cargo due to a lack of storage space.

It is not uncommon for large cargo ships to undergo long waiting periods, given the time needed for preceding vessels to unload their goods and free up berths at the port, it said.

The Panamanian ship's crew struggled to obtain supplies because quarantine measures had been stepped up to contain the spread of the highly contagious Delta variant of the novel coronavirus, the administration added.

The much-needed supplies left a wharf in Fuzhou at 3 pm on Saturday aboard a ship arranged by the administration. They reached the freighter two hours later.

Four workers in protective suits helped transfer the supplies to the ship while the Chinese sailors remained in the ship's cabin throughout the process, with the windows and doors shut.

The workers were placed under home quarantine after they returned. There have been no reports of a COVID-19 outbreak on the ship.

The crew later posted a short video online to show their gratitude. They formed a row and chanted thank-you's while holding a white banner with characters expressing their appreciation for the support they have received from local authorities and the public.

The administration said the supplies should sustain the crew for three months.

Carrying 72,000 tons of corn, Pescadores SW departed New Orleans in the United States on May 26 and anchored near the port in Fuzhou on July 13.

It had not docked during its voyage except for a refueling stop in early June before entering the Suez Canal.

The authorities said they will speed up efforts to manage warehouses and free up storage space so that the ship can unload as soon as possible.

Chen Meiwei, an official with the administration, said the local government and the maritime authorities will not leave crew members to fend for themselves amid tightened infection control measures. He also urged crew members to ask for assistance through proper channels so as to avoid causing a panic among the public.