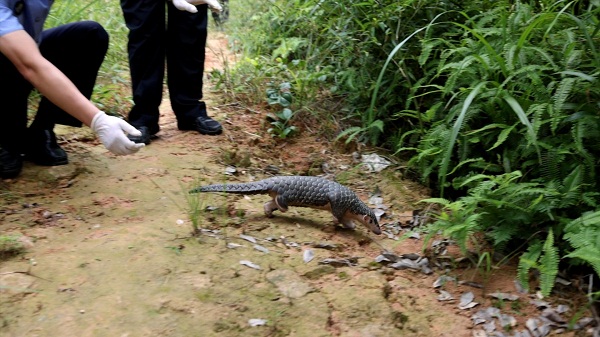 A male pangolin found in Taimushan town of Fuding, a county-level city in Fujian province, was released in good physical condition. [Photo provided to chinadaily.com.cn]

A male pangolin was returned to the wild in Taimushan town in Fuding, a county-level city in Fujian province, after it was found by a resident along a remote road on Tuesday, local authorities said.

As a first-class protected wild animal species in China, the pangolin was cared for by the local police. It is in good physical condition, without any disease or wounds, according to officers and animal protection experts. It is about 55 cm long and weighs about 2 kilograms.

It was released on a nearby mountain, which is rich in forest life, including ants, a pangolin staple. The area meets the standards for the animal's survival after release, local authorities said.