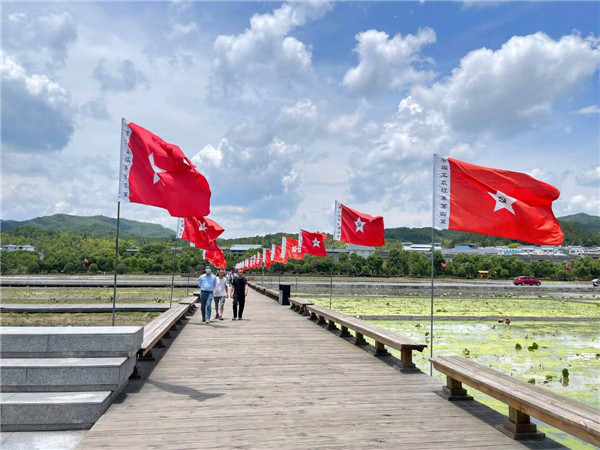 Visitors walk along a plank road heading to the site of the Ninth Party Conference of the Fourth Army of the Red Army, also known as the Gutian Conference, in Gutian town, Shanghang county, Fujian province. HU MEIDONG/CHINA DAILY

Dressed in a replica army uniform, Lai Jinhua, a tour guide at the site of the famous Gutian Conference, shuttled between groups of visitors to tell them stories about the Red Army, a predecessor of the People's Liberation Army.

During the five-day May Day holiday, the site in East China's Fujian province received around 40,000 tourists, traveling individually or as part of tour groups, with some even wearing replica Red Army uniforms, aiming to connect with the revolutionary past and reclaim the revolutionary spirit.

"The number of visitors has risen every year with the growing awareness of patriotism, and as people pay more attention to Red Tourism, which deepens their understanding of a key meeting in army history and spurs the economic growth of my hometown," said Lai, who was losing her voice after spending a day talking to visitors.

Gutian, an ancient town in Shanghang county in the west of Fujian, is enveloped by mountains and lush forests. It became a place of great significance as a result of a decisive event in the history of the Communist Party of China and the Red Army.

In March 1929, the Fourth Army of the Red Army, led by Mao Zedong, marched to Fujian in an attempt to establish a new revolutionary base.

To ensure the success of the Party and the army, Mao and the other leaders presided over the Ninth Party Conference of the Fourth Army in Gutian. That meeting is now known as the Gutian Conference.

Mao and the other leaders agreed that the army must be led by the Party, and it was the people's army as it came from the people and was for the people.

"Only after I became a tour guide and started learning about the historic meeting did I understand the difficulties the Party experienced in the early days, as well as its spirit of never giving up," Lai said.

In October 2014, a military political work conference was held in Gutian. President Xi Jinping, also chairman of the Central Military Commission, said the Party should focus on the importance of political work in strengthening and rejuvenating the army and should also strive to develop under new conditions.

The new Gutian meeting was another milestone in the PLA's ideological and political construction on the road to a better country and a stronger army.

Thanks to the two meetings, the remote township has become a popular Red Tourism destination, and, as the Party will celebrate its centenary on July 1, enthusiasm for revolutionary history is high among those interested in China's revolutionary culture.

In 2019, more than 5.6 million people visited Gutian, and, despite the COVID-19 epidemic, over 10,000 tourists visited the township every day during this year's Spring Festival holiday, according to the local government.

"I came here not only because I knew the history of the conference, but also to pay tribute to the revolutionary martyrs. After seeing the revolutionary cultural relics and listening to the stories, I understand that the success of the revolution was not achieved easily," said Zhou, a banker from Hubei province, who preferred not to give her full name.

At the conference site, visitors can see such relics as the first printed newspaper published by the army, a bed covered by a ragged quilt and the soot left by the fire the participants lit to heat the building, all of which tell the story of the past.

In addition, new technologies such as augmented and virtual reality help to restore "red memories" for visitors.

"All the facilities at the site are displayed as they were back then," said Zeng Hanhui, curator of the Gutian Conference Memorial Hall. He added that every revolutionary cultural relic records historic changes, while touching stories tell of the Party's efforts to overcome difficulties and forge ahead.

Relying on its red resources, Gutian has been introducing training and study tours to the site to help shape it as an exemplary base of red culture.

"Every year, we receive more than 100,000 people who come here for Party history education," said Qiu Weiqin, deputy secretary of the Party committee of Shanghang.

The growth of Red Tourism has prompted Gutian to better utilize its advantages in terms of environmental resources and scenery to consolidate the results of poverty alleviation efforts and inject new life into the vitalization and green development of the countryside.

"We have employed the simple idea of improving the infrastructure while protecting the environment," Qiu said. He added that the local government has made great efforts to improve and clean the roads and stores to give the town a new look.

In 2015, a bullet train station opened in the town, and a number of bus routes were developed to take tourists directly to Red Tourism sites in Shanghang as well as Longyan city.

The improvement in the transportation infrastructure has attracted tourists from nearby cities and from other provinces, Qiu said, noting that great attention has been paid to preserving Gutian's environment and that construction of tall buildings is banned to ensure that visitors can enjoy the town's natural scenery.

Moreover, the fields of rape flowers in front of the conference site are well-tended so visitors can see them blossom in spring.

Shanghang is now focusing on forging a financial circle based on Gutian's Red Tourism resources and ecotourism around the Meihua Mountains, where the town is located.

Liao Yongzhong, head of the Gutian Restaurant and Catering Association who runs a restaurant and guesthouse, said the influx of tourists has prompted more than 70 percent of local residents to engage in tourism-related businesses, including running guesthouses and restaurants and selling souvenirs at various sites.

The catering industry provides jobs for locals and boosts incomes, which is crucial for the vitalization of the countryside, he added.

Liao's restaurant offers food similar to that the Red Army soldiers would have eaten decades ago, including red rice, pumpkin soup and wild vegetables, so visitors can experience army life in olden times. According to Liao, his restaurant can serve an average of 100 people at each sitting, while the 18-room guesthouse can host about 35 people a night.

He said turnover at his restaurant and guesthouse has been rising since 2014 and exceeded 500,000 yuan in the first four months this year. The boom prompted his son to return home to run the family business in 2015.

Liao said he has witnessed great changes in his hometown. The streets are wider and cleaner, the environment has improved and more migrant workers have returned since Gutian became popular with guests from out of town.

Lai, the tour guide, expressed a similar opinion. During her leisure time, she takes her two children for walks near the conference site while telling them stories about Gutian.

Although the children are too young to understand the history, Lai said she wants them to know that today's peace and prosperity were won by the sacrifice of the revolutionary martyrs and that they should always be grateful for that.