He used the inspection tour to urge the province to make bolder moves in serving and integrating into the country's new development paradigm, make bigger strides in exploring the new approaches for integrated development across the Taiwan Straits and make greater breakthroughs in helping the people to live a higher-quality life.

Boosting high-quality growth requires comprehensively and precisely implementing the new development philosophy, which features innovative, coordinated, green and open development for all, Xi said at a meeting attended by local officials before wrapping up his inspection on Thursday.

Xi's inspection, which took him to Nanping, Sanming and Fuzhou, the provincial capital, took place a few days after the annual two sessions, the country's most important political event shaping the political and economic agendas for the year ahead and beyond.

He chose Fujian, where he worked between 1985 and 2002 in various posts and launched a series of reforms with strategic significance and far-reaching influence. Forestry reform is one of them.

Visiting a rural property rights transaction center in Sanming's Shaxian district, Xi praised the active efforts made in the district on collectively owned forest tenure reform, noting that Sanming is an important birthplace of such reforms.

In the past, Chinese farmers were excluded from collectively owned forestry and shared in little revenue from timber. As a result, they lacked the incentives to protect forests, and timber theft was rampant.

To solve these problems, Fujian initiated a reform to decentralize the collective forest tenure system in favor of individual or household management in 2002, when Xi was governor of the province. The move is considered the beginning of China's new round of forest tenure reform. Such reforms echoed Xi's instruction to develop forestry as an industry while protecting the environment.

Local authorities have explored a number of reform measures, including taking steps to encourage farmers to transfer their timberland to forest cooperatives and issuing more loans to forestry businesses to solve their financial issues.

The total forestry output value in Sanming reached 114.6 billion yuan ($17.6 billion) in 2019, and the city's forest coverage exceeded 80 percent in 2020, according to local authorities.

Xi told officials that for major reforms, trials should be conducted first to gain experience before such reforms are promoted. The methodology of "crossing the river by feeling the stones" is relevant for carrying out reforms and will continue to work, he added.

Yang Xingzhong, Party secretary of Shaxian district, was impressed by Xi's knowledge and care about Sanming's forestry reforms. "We will uphold the people-centered philosophy and continue to carry out reforms to solve the existing problems to deliver more benefits to the people and allow forestry to realize high-quality growth," Yang told Fujian Daily newspaper.

Xi has stressed the importance of reforms in the country's overall development on various occasions. While presiding over a meeting of the Central Committee for Deepening Overall Reforms in February, he underlined the need to allow comprehensive reforms to play a key role in building the new development paradigm.

While visiting the Shaxian General Hospital in Sanming, Xi learned about local efforts in reforming the medical and healthcare system as well as how the reforms have benefited local people. He urged continuous efforts to improve healthcare services based on the existing achievements, saying "health is the most important indicator of people's happy life".

The local hospital has jurisdiction over 12 grassroots branch hospitals and 128 extended village health clinics. Its establishment is also one of the measures to reform the local medical and health system.

During the inspection, Xi mentioned the unbalanced development of the country's health sector, and underlined the need to continue to intensify reforms of the country's medical and healthcare system and increase medical resources in the 14th Five-Year Plan (2021-25) period. "The philosophy of putting people's lives first and foremost must be upheld," he added.

Yang Xiaodeng, head of Youxi General Hospital in Sanming's Youxi county, said he was encouraged by Xi's praise of the city's medical and healthcare reforms."We will keep his instruction in mind and keep deepening the reforms in the healthcare sector so that the local people will have greater sense of gain and happiness," Yang said.

Xi also stressed during his inspection the importance of innovation in the country's development, and urged efforts to increase support and improve the environment for innovation to stimulate vitality and creativity.

While visiting RICOM, an optical lens manufacturer in Fuzhou, on Wednesday, Xi said China will give full support to those who are committed to innovation and make contributions to the country.

Talking with employees of the company, he said innovation is a must for the country to continue making progress during the 14th Five-Year Plan period. Following others' steps is not workable and the nation must increase its efforts in technological self-sufficiency and self-dependence, Xi said, and it must enable innovation to remain the core in the overall situation of its modernization drive and make innovation a national policy.

This requires those who can seize opportunities with a sense of responsibility and mission and have the capability to do the job well, he added. 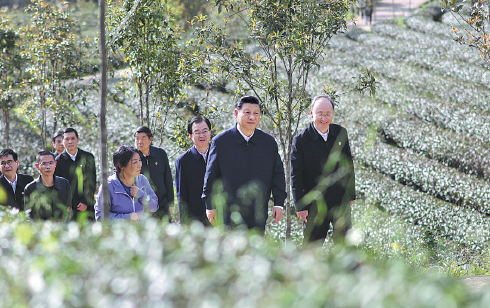