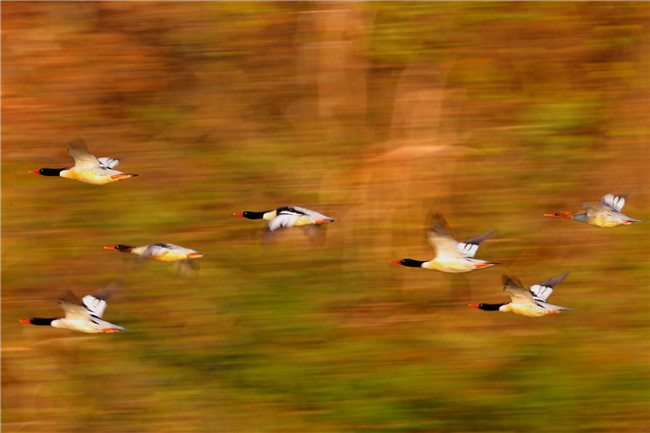 A flock of Chinese mergansers is captured on camera in a wetland in Fuzhou, East China's Fujian province. [Photo by Chen Lin/for chinadaily.com.cn]

A flock of Chinese mergansers, an endangered bird species under State class-one protection, has been captured on camera in a wetland in Fuzhou, East China's Fujian province, according to a local news report.

The Chinese merganser, which normally nests in trees near rivers, is considered an endangered species by the International Union for Conservation of Nature. It has a history of more than 10 million years and is considered a "living fossil". There are only about 1,000 of them worldwide and they are rarely seen.

"Chinese mergansers usually breed along rivers in the mountainous areas of northeastern China, and Fuzhou is their main breeding ground," according to Chen Lin, a wildlife photographer.