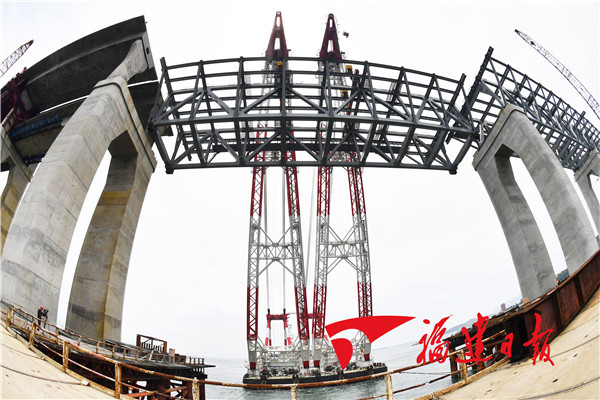 The Pingtan Haixia Rail-Road Bridge, China's first cross-sea rail-road bridge, has taken another solid step towards completion as its last steel girder beam was installed on May 12.

The bridge will be a 16.3-km connection between Fuzhou, capital city of East China's Fujian province and the island city of Pingtan off the coast of the Taiwan Strait.

With an estimated investment of 10.9 billion yuan ($1.7 billion), it will greatly shorten the traffic time between the two cities. The bridge has two layers, with the upper level carrying a six-lane highway and the lower bearing a double-track railway.

Strong winds make it tough to build a bridge over the water, according to an engineer from the bridge building bureau of China Railway Construction Co. As a result of that, the company invested 360 million yuan to build a double-arm floating crane, which could lift and install a 1,360-ton steel girder as a whole, he said.

The bridge is scheduled to be completed this year and open to traffic in 2020. The cross-sea rail link is also an integral part of the 88-km Fuzhou-Pingtan railway, which starts from Songxia Port in neighboring Changle county and reaches Su'ao town in Pingtan.