President Xi Jinping, who is also general secretary of the Communist Party of China Central Committee and chairman of the Central Military Commission, greets people from all walks of life across the country on Wednesday while meeting with them via video link from Beijing. XIE HUANCHI/LI TAO/XINHUA

President holds video meetings with ordinary people across the nation

President Xi Jinping sent his festive greetings on Jan 18 to people throughout China ahead of Spring Festival, or Lunar New Year, which falls on Jan 22.

During meetings via video link with people from all walks of life in different regions of China, Xi, who is also general secretary of the Communist Party of China Central Committee and chairman of the Central Military Commission, called for implementing the measures for epidemic prevention and control in the new stage of COVID-19 response and ensuring that people of all ethnic groups across the country spend a safe and happy festival.

Through the video link, Xi talked with and sent his greetings to members of the public from Beijing, and Heilongjiang, Fujian, Henan and Sichuan provinces and the Xinjiang Uygur autonomous region.

Among those participating in the meeting were medical workers in a hospital, senior citizens at a welfare home, workers at an outlying oilfield, travelers and staff members at a high-speed railway station, vendors and customers at a wholesale market, and people in an ethnic minority village.

Xi said that every year before Spring Festival, he usually goes to see the people at the grassroots level. "I would like to chat with them to see what difficulties they still have, hear what plans they have in the new year, and share with them the festive happiness," he said.

Xi said: "This year, I choose to use the video link to see more places. Despite the screen separating us, I can still feel the strong festive mood in different parts of the country, and feel your joy and happiness. My heart is always with the people of all ethnic groups of the country." 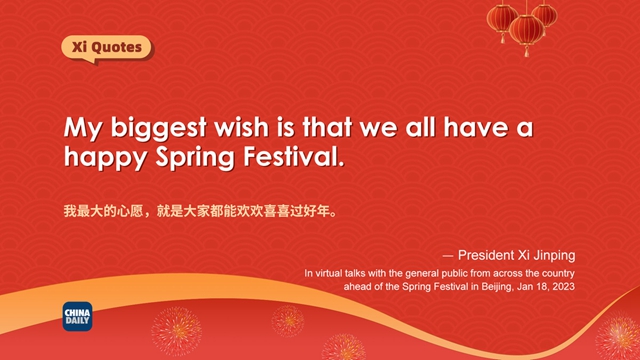 He noted that Spring Festival is a traditional festival of the Chinese nation and also a happy moment for family reunions. "My biggest wish is that everybody spends a happy festival," he added.

During the Spring Festival holiday, efforts must be made to implement the various epidemic prevention and control measures formulated in line with COVID response situation in the new stage, guard against emergencies and accidents and ensure that people around the country enjoy a happy, safe and harmonious festival, he said.

Speaking on epidemic control, Xi said that over the past three years, China has carried out a rigorous COVID response policy, which has proved to be the correct choice, and the nation withstood the attacks of various rounds of virus mutations and reduced the rate of critically ill patients and the death rate caused by COVID infections.

Looking back, Xi said that the past year was extraordinary and momentous. People on all fronts around the country have worked in unity to prevail over various difficulties and challenges, and made contributions and achieved new progress. "Everyone deserves credit!" he said.

This year is the beginning of fully implementing the guiding principles of the 20th CPC National Congress. Xi expressed his hope that in the new year, all the Chinese people will firm up their confidence and work hard together to make greater achievements.