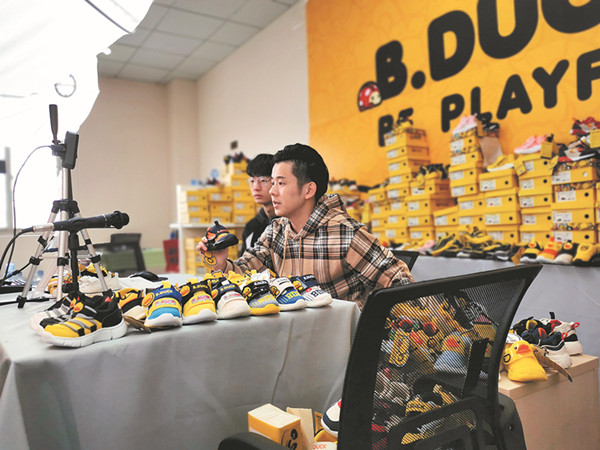 Exporters in the traditional foreign trade hub of East China's Fujian province have been tapping e-commerce platforms and investing in new innovation projects to boost their trade volume with support from the local government and financial institutions.

With 1.33 trillion yuan ($190 billion) worth of foreign trade in 2019, the coastal province has come out with several policies to stabilize foreign trade, alleviate corporate financing difficulties for companies in need, promote consumption and ensure the flow of foreign direct investment in the first half of this year.

The aim is to mitigate the effect of uncertainties arising from the COVID-19 pandemic and weak demand for goods overseas.

Putian, a prefecture-level city of Fujian and one of the country's premier shoe-producing areas, became one of China's 46 cross-border e-commerce comprehensive pilot zones approved by the State Council in May to support the city's shoe export business and half a million industrial workers.

Cross-border e-commerce has become a main channel for traditional export-oriented companies to pursue structural transformation and upgrading thanks to expanding globalization, the rapid growth of telecommunication technologies and digital solutions in recent years, he said.

Chen Geng, chairman of the Fuzhou-based outdoor garment manufacturer and exporter Fashion-Flying Group, said his firm will partner with more cross-border e-commerce service providers and domestic e-commerce platforms such as Tmall and DHgate to diversify its sales channels in the global and domestic markets.

The value of the company's foreign orders dropped 20 percent on a yearly basis to $80 million in the first half of this year after several clients canceled their shipments in the second quarter.

Supported by over 17,000 employees at its manufacturing bases in China, Vietnam, Ethiopia, Rwanda and Bangladesh, the company shifted part of its business from producing outdoor jackets and sleeping bags to churning out protective clothing to offset losses from insufficient foreign orders between February and May.

"As many countries have accumulated enough medical supplies, we only produce a small proportion of protective clothing now and will continue to make breakthroughs in product design and the innovation of new fabrics to secure our long-term global market share," said Chen from Fashion-Flying, adding staff number of the group's research and development department has expanded to 200 employees this year.

To maintain solid economic fundamentals, the government has emphasized the importance of focusing on the "six priorities" of safeguarding employment, people's livelihoods, the development of market entities, food and energy security, the stable operation of industrial and supply chains, and the smooth functioning of society.

The Fujian branch of the Export-Import Bank of China set up a 10 billion yuan special fund for lending at low interest rates earlier this year to support manufacturing companies in Fuzhou, especially leading exporters, to ease their financing issues.

Under the policy, the loan terms should not exceed six months and guarantee exemption can be adopted for enterprises that meet normal operational conditions.

The government has been encouraging banks to support firms through supply chain financing by stabilizing operations of upstream and downstream supply chain companies.

This is necessary to ensure that the production capacity of foreign trade companies is sufficient, said Wang Xuguo, head of the Fujian branch of the Export-Import Bank of China.

As cash flow is of significance for exporters, the bank has opened a special green channel to complete the approval process within three working days under the premise of controllable risks and compliance with regulatory requirements.

Answering local government's call of enhancing high-tech manufacturing and supported by the favorable policies, many companies have set up units, or charted plans, to strengthen their innovation arms.

About 3.3 billion yuan will be invested in the new facility. It is expected to attract about 1,000 researchers within five years and scheduled to be operational in the fourth quarter of 2021.