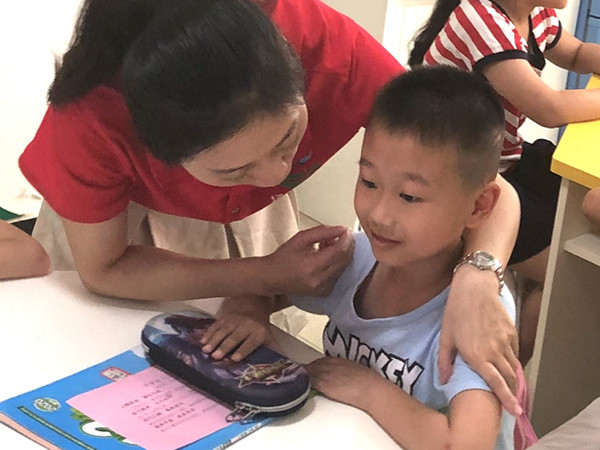 For Chen Yaowen, a first-grade pupil in Xiaqi village in Fu'an, East China's Fujian province, this year's summer vacation is no longer all about roaming around without doing his daily homework on time.

Every morning, his father will bring him to an off-campus class set up in the village committee's office building, where he will spend several hours with other Xiaqi pupils doing their homework, listening to stories and singing songs accompanied by several volunteer teachers.

"I like to be here because I can enjoy the air-conditioner and play with other kids," the nine-year-old said.

The class, which started this year, is a pilot project funded by the government in an effort to provide off-campus tutoring services for the village's children, especially elementary school students.

Xiaqi used to be a poverty-stricken fishing village whose residents lived on sampans. Thanks to the country's resettlement program, almost all of Xiaqi's boat dwellers moved to new homes on land from 1997 to 1999. By 2017, all poverty-stricken households in Xiaqi had been lifted out of poverty.

"Pupils can come here as long as they wish. It's free of charge," said Guo Fang, one of the teachers with the class.

According to Guo, most adult villagers in Xiaqi received little education and they are not capable of helping their children, even first graders, with their homework. Moreover, the children's parents usually have to go fishing on the coastal waters in daytime, leaving little time to accompany their children.

The former kindergarten teacher also tries to teach pupils more about hygiene when they come to the class.

Guo showed them pictures that illustrate what the environment will look like if people throw litter everywhere. She also brought them outside to pick up trash and clean the floor.

"The villagers pay little attention to keeping good hygiene. I hope the children can spread the hygienic knowledge they learned here back at home to their family members," she said.

Guo also is considering a summer camp activity that aims to enable the youngsters to learn more about the village's history, such as how their grandparents lived on boats in the past.

"Education is still a relatively weak part of our village's development, but it is the only way that our next generations can live a better life than us. The off-campus tutoring class is a good thing and I hope it will be carried on," he said.