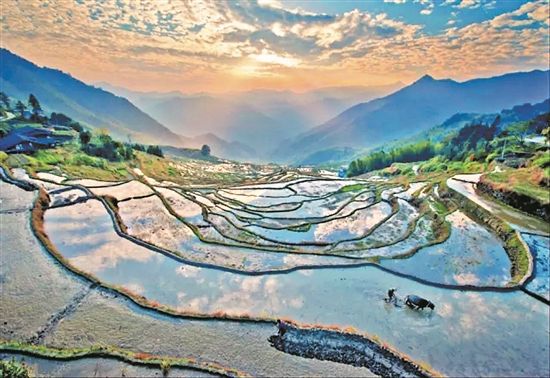 The vast terraced fields in the town cover an area of more than 10,000 mu (667 hectares), and are scattered over eight villages. They were listed among the National Important Agricultural and Cultural Heritages in 2013, and awarded the title of Globally Important Agricultural Heritage Systems in 2018. They have become a calling card for Fujian in the promotion of its global image.

Due to the poor topographic conditions and the rising costs of labor, local villagers have faced great challenges in the planting and protection of the terraced fields. Local authorities said that they cooperated with some tech companies to accelerate agricultural mechanization, and cultivate new types of skilled farmer, in an effort to promote modernization and the industrialization of the agricultural sector.

Bao Shikai, manager of Fujian Liangzhi Agricultural Science and Technology Company, said that they joined hands with Fujian Youlong Agricultural Science and Technology Company to set up a production base for green agricultural products in Lianhe town, which has greatly improved the economic benefits of local agricultural products. An internet of things (IoT) demonstration park was also established in the town, helping local agriculture achieve informatization and intelligent management.

IoT technology has been widely used in agricultural production. It helps collect a large amount of useful information in areas such as temperature, humidity, wind and precipitation and guides farmers with scientific planting methods, according to Chen Nengwen, manager of Fujian Youlong Agricultural Science and Technology Company.

Bao added that his company will further promote the integration of traditional and modern agriculture, and an e-commerce platform will be established to expand sales channels for local agricultural products.