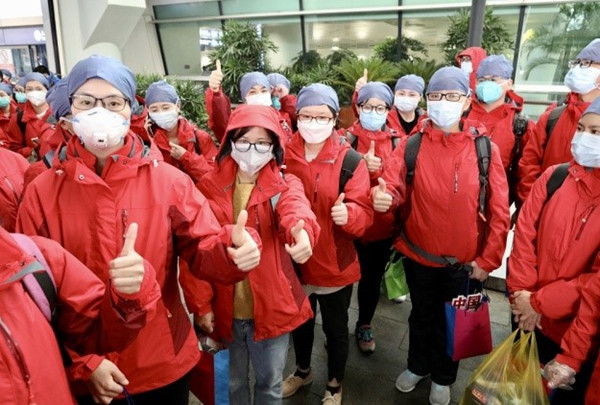 The National Health Commission dispatched more than 21,000 medical workers from across China to Wuhan in Central China's Hubei province to assist in caring for patients. [Photo by Zhu Xingxin/China Daily]

China's top health authority has organized another 3,170 medical staff in 21 medical teams to help care for novel coronavirus pneumonia patients in Wuhan, the epicenter of the outbreak, it said on Thursday.

As of Wednesday, the National Health Commission had dispatched more than 21,000 medical workers from across China to Central China's Hubei province, where Wuhan is located, to assist in patient care, it said.

Lin Xu, a critical care doctor from Fujian Medical University Union Hospital in Fuzhou, East China's Fujian province, is one of the most recent of 3,170 doctors sent to Wuhan to help fight the highly infectious disease. He arrived at Tianhe International Airport in the city on Thursday afternoon.

"I got the notice from the hospital last night that I would set out for Wuhan," he said. "When I told my parents in the morning I would leave, they supported my decision and told me to take care. I must come here as now is the time we are most needed."

Lin said he is in the fourth group of doctors and nurses sent by the hospital for Wuhan, which included 139 medical workers.

In the critical care department, where he works, all doctors and nurses, who number more than 20, have registered to support Wuhan voluntarily, but only two were selected this time, he said.

Zheng Xiaona, a doctor from the VIP department at Fujian Provincial Hospital, another top hospital in the province, also arrived in Wuhan on a flight Thursday.

"As doctors, we are meant to cure patients and save lives, just as in the oath we made when we became doctors," she said. "We believe health authorities in Fujian will do their best to provide necessary protective materials for us."

The number of reported cases of the novel coronavirus in Wuhan reached nearly 33,000 as of Wednesday, according to the Hubei Provincial Health Commission.